Two more stars are headed to Hollywood ... the Dodgers just landed two of the best players in baseball, Max Scherzer and Trea Turner, in a trade with the Nationals.

The deal -- which got done right at Friday's MLB trade deadline -- is MASSIVE for L.A. ... which now boasts probably the best hitting lineup AND starting pitching rotation in baseball.

Scherzer -- who owns a 7-4 record this season with a 2.83 ERA -- will join Cy Young-quality arms like Walker Buehler, Clayton Kershaw and potentially Trevor Bauer (who's currently on paid leave) as Dodgers' SPs.

It's been reported that Turner -- who's batting .322 with 18 home runs and 21 stolen bases this season -- will make the move from shortstop to second base when he gets to Los Angeles.

As for what the Dodgers had to give up to land the pair ... L.A. sent a slew of prospects, including catcher Keibert Ruiz, in order to get the deal done.

The Dodgers are currently 3 games back behind the Giants for first place in the NL West ... but something tells us that gap is about to narrow in a hurry. 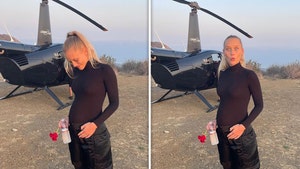