The horrendous accident on set of "America's Got Talent: Extreme" had crew in a blind panic, and you can hear just how serious it was by listening to the 911 call from the set.

We've obtained the emergency call made by a woman -- an on-site medic -- who describes the stunt gone terribly wrong. She says the stuntman, Jonathan Goodwin, is "agonal and posturing" ... a term used for patients close to death, struggling to breathe and making unnatural movements.

The caller tells dispatch they need rescue and a helicopter STAT. Goodwin missed the airbag on which he was supposed to land, and hit his head on the ground, suffering a neurological injury.

At the time of the 911 call, CPR had not been performed, because Goodwin had a pulse. A show source tells us he was responsive when taken to the hospital, but his current condition is unknown.

The Sun was first to publish the 911 call.

TMZ broke the story, Goodwin was supposed to free himself from a straitjacket and land on an air mattress below before two cars on either side -- hoisted by cables and swinging back and forth -- collided and sandwiched him in between.  The collision caused a massive explosion. 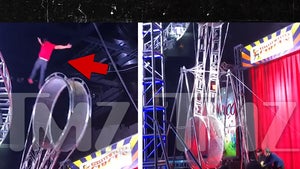