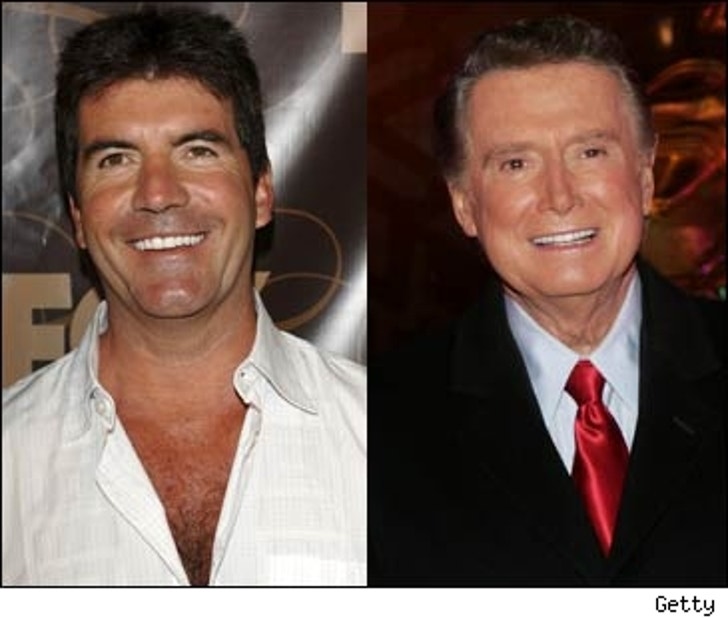 THE RUMOR: Simon Cowell is replacing Regis on 'Live.'

HOW IT STARTED: A few months back, Simon met with several TV syndicators about wanting to host a 'Regis and Kelly'-type show. At the same time, there was talk that Regis might be leaving his gig.

HOW IT SPREAD: The rumor spread along two parallel tracks. Simon's "candidacy" to replace Regis was added to a growing list, which included Jeff Probst and Jeff Gordon.

Last Friday, more people started talking after Simon subbed for Regis - and he was VERY funny and comfortable with Kelly. TMZ has learned Regis had been in somewhat difficult talks with ABC to renegotiate his contract. We're told ABC wanted a much shorter deal than Regis wanted, leading to speculation that ABC was looking for a replacement.

Regis himself fanned the flames by doing the FOX New Year's Eve Special with Jillian Barberie. There was a buzz that FOX was interested in recruiting Reeg.

THE TMZ LOWDOWN: For several reasons, it ain't gonna happen. First, we're told Regis has inked his deal with ABC. Indeed, intrepid New York Post TV reporter Michael Starr has said Reeg signed for four years with an option to bail after two. Second, although Simon has explored the possibility of hosting a chat show, people who work directly with the Brit tell us he's focused more on producing these days than being on the air. Simon's show, 'American Inventor,' debuts on ABC next month.

TMZ Truth-O-Meter: So, will Simon replace Regis?
Click below to find out!