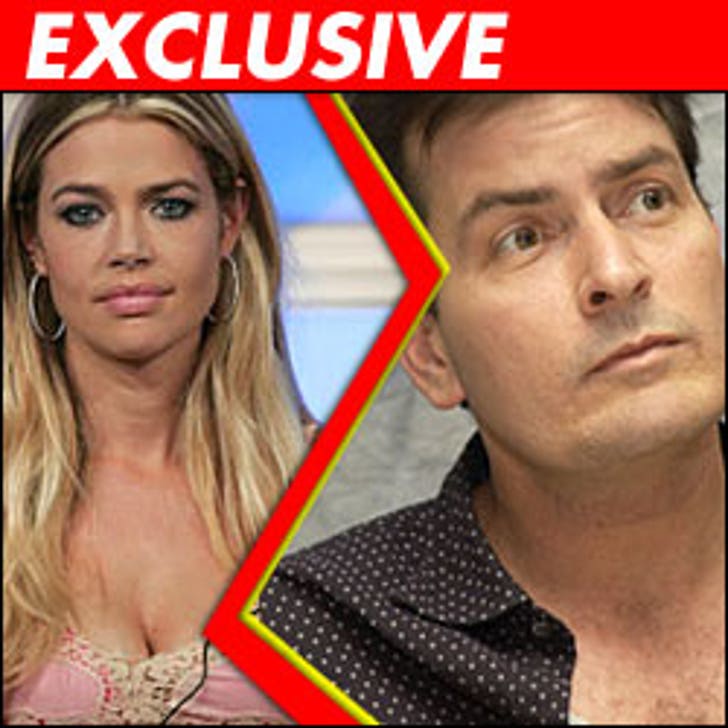 TMZ has learned that Denise Richards' lawyer went to court Friday, alleging that her estranged husband Charlie Sheen has threatened herand that his alleged pornography and prostitution habits have put their children at risk. Sheen has specifically denied most of Richards' allegations.

In the documents, filed Friday in Los Angeles Superior Court, Richards alleges that Sheen pushed her, shoved her and threatened to kill her. Richards also claims in her declaration that Sheen made threats against her parents. In his own declaration, Sheen denied making threats.

Richards says in her declaration that during their reconciliation last September, she discovered Sheen was visiting websites with "very young girls, who looked underage to me, with pigtails, braces, no pubic hair, performing oral sex with each other."

The declaration, filled with lurid allegations, was filed by her new lawyer, Neal Hersh. Richards also claims Sheen has problems with gambling and prostitution.

Richards says that Sheen told her that he has a madam.

Richards, who sought a restraining order, claims that Sheen told her after she allegedly discovered the websites, "I hope you f-king die, bitch."

In addition to asking for a restraining order, Richards asked that either Sheen's visitation rights be suspended or monitored.

The judge granted Richard's petititon. Sheen is ordered to stay 300 feet away from Richards and also required that Sheen's visitation with the children be monitored.

The couple has two daughters, two-year-old Sam and Lola, who will turn one in June.

Richards filed for divorce in March, 2005.

TMZ called Sheen's publicist, Stan Rosenfield, who said "For the last year Charlie Sheen has been hit with these ridiculous charges over and over and over again and has chosen to be a respectful gentleman and just respond with no comment."

Sheen's lawyer, Lance Spiegel, says "Mr. Sheen strongly believes that it is in the best interests of his children to have frequent and substantial contact with each of their parents. His children are his priority and he intends to do everything possible to assure that he will continue to play a significant role in their lives. He regrets the necessity of the court's involvement in this dispute but looks forward to establishing that he is a loving and committed father."

Update: 4:40PM ET -- Richards issued the following statement: "I am disappointed that the situation has deteriorated to the point that it has become necessary to seek the assistance of the court. However, my primary concern is and always has been the welfare of the children and this action today was taken to ensure their safety as well as mine."

Update: 5:30PM ET -- Charlie Sheen issued the following statement to TMZ: "This is a most obvious immature and transparent smear campaign designed to hurt, embarrass and ultimately extort me. I deeply regret her response to my request for the court to decide what's best for our children has taken the form of baseless allegations that I deny. For the sake of my children, I am electing not to reciprocate in kind."