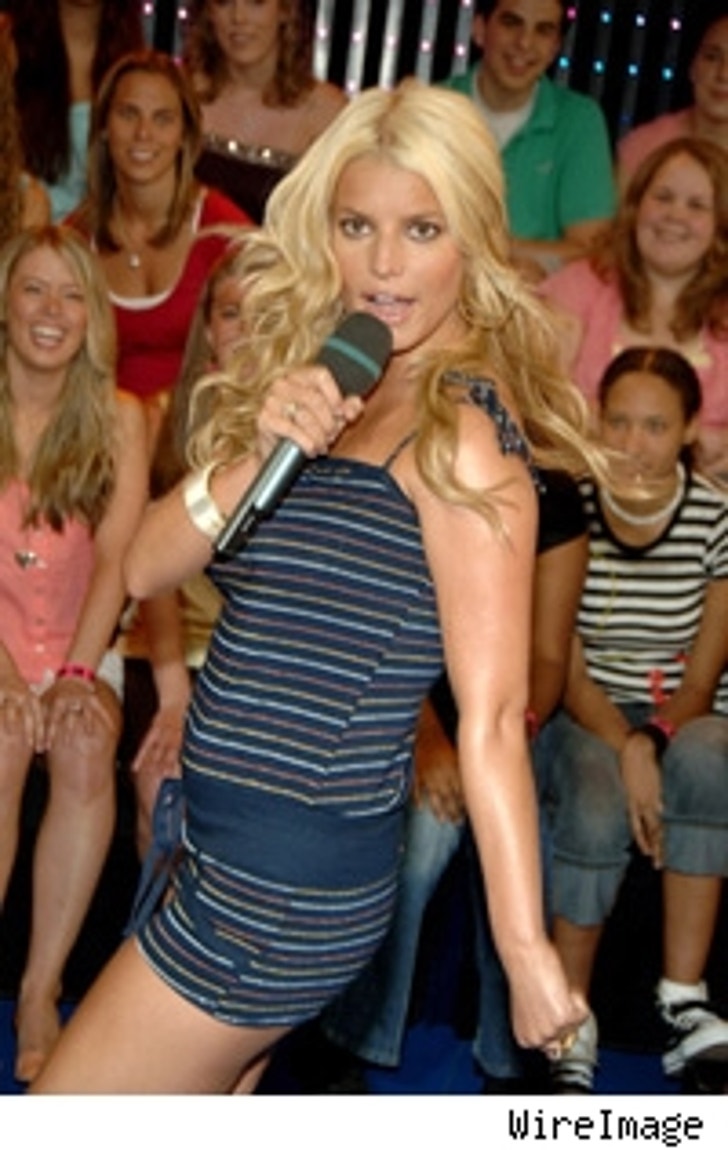 Jessica Simpson is her own one woman cover band. And by the looks of her career, her breasts may be the only original thing about her.

One of Simpson's first singles was "I Think I'm in Love With You" which featured a sample of John Mellencamp's 1982 hit "Jack and Diane."

In 2004, the former "Newlyweds" star covered Berlin's Oscar winning song "Take My Breath Away" on a special edition of her album "In This Skin." That same album also featured a cover of Robbie Williams' song "Angels."

The following year Simpson recorded "These Boots Are Made For Walkin',"a cover of Nancy Sinatra's 60s hit, for the big screen remake of the TV series "Dukes of Hazzard." Sensing a pattern here?

Jessica's latest single "A Public Affair," although not a cover, sounds suspiciously similar to Madonna's 80s hit 'Holiday." Regarding the comparisons, Simpson said "It wasn't a sample or something I meant to do, but she did influence me and still does today." Apparently so, Jess, apparently so.

In an interview with MTV.com last week, Simpson revealed her next single may be -- you guessed it -- another cover.

While La Simpson believes her rendition of Dead or Alive's 80s hit "You Spin Me Round (Like a Record)" isn't a cover and maintains "it's a sample, really," she does say "it reminds me of that "Waiting for Tonight" Jennifer Lopez track that everyone embraced." Two covers, er samples, in one ... sweet!

And since three times the charm, Simpson's new album "A Public Affair," out Aug. 29, features one more cover.

Jessica credited Patty Griffin's "Let Him Fly" with helping her through her breakup from ex-husband Nick Lachey and recorded a rendition of it to close out her album.

Simpson says the song "is about how sometimes you just have to know when to let something go." If only she were talking about recording covers!