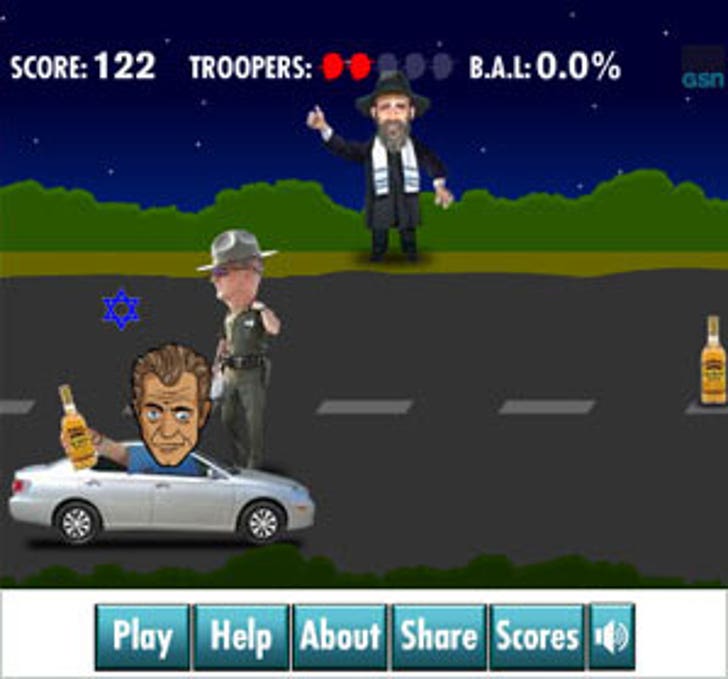 Desk jockeys the world over can now experience what it felt like to be Mel Gibson as he sped drunkenly down Pacific Coast Highway on that fateful July night. "So You Think You Can Drive, Mel?", a Flash-based game on gsn.com, recreates Mel's drive in animated form, replete with tequila bottles, state troopers, and Star of David-slinging rabbis.

Players maneuver (or try to maneuver) Gibson's Lexus into the path of tequila bottles, which get Mel more and more loaded, which in turn makes the car harder and harder to control. Standing in the way are stern-looking sheriffs, and running into five of the lawmen -- which splatters the poor smokey all over the road -- ends the game. Further complicating the path from A to B is a rabbi standing on the side of the road chucking Stars of David at the Lexus, all to the tune of "Hava Nagila." (Of course, for the record, Gibson didn't hit any sheriffs that or any other night and as far as we know there were no roadside rabbis present either.)

At game's end, players get a blood alcohol measurement, and some driving advice along the lines of "Let go of your 'Lethal Weapon' and keep both hands on the wheel" and "You and Mel should carpool to rehab." Gibson, of course, can't actually drive for a couple more months, but maybe the GSN game will satisfy any hankering he has to get behind the wheel until then.