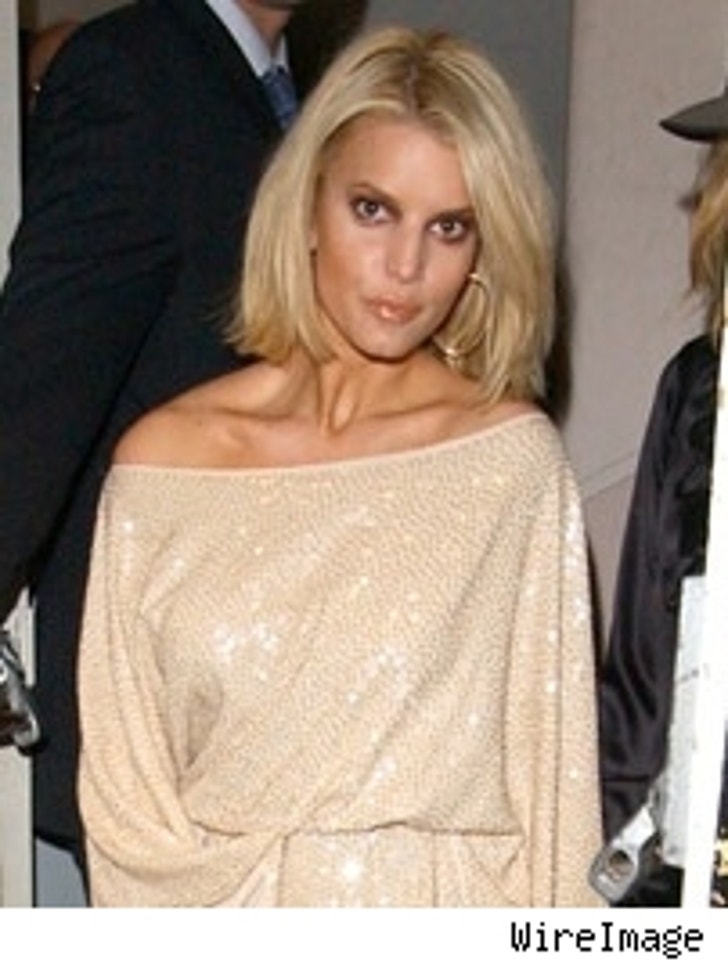 The cracks are really starting to show in embattled pop princess Jessica Simpson's ever-more-fragile psyche – and her physiology as well.

In London last week, Jess fled the Storm Bar, where her sister Ashlee was holding court after her debut in "Chicago," in a huff, according to Page Six, yelling, "I don't want to be here – why won't people just leave me alone?" Her dad acknowledged to UK tabloid the Mirror that "Jess is quite down at the moment. She's not comfortable talking to people."

And, then, filming a spot for DirecTV, Simpson kept the assembled crew waiting for an hour because of a stomach bug. Her stylist-cum-right-hand-man Ken Paves was overheard saying, "Well, what do you want her to do, [bleep] her pants?" But Simpson's new rep said that it was all down to her voice not being healed. Of course, it can't help that, as sources tell TMZ, her ex-hubby Nick Lachey and MTV vixen Vanessa Minillo are "going strong" and that the pair spend "hours upon hours" holed up in Minillo's pad in Manhattan when Nick's in town.

If there was any simmer left in the supposed feud between Britney Spears and Christina Aguilera, it appears to have been doused with Christina's purchase of a $570 gift bag for little Sutton Pierce, Brit's newborn boy. The bag of goodies, according to Life & Style (via MSNBC), includes a hooded towel, overalls, slippers, and a crockery set – though we're not entirely sure what a two-week-old child needs with a crockery set. (They do grow up fast, don't they?)

Meanwhile, L&S also reports that the room Sutton Pierce shares (shares?) with his older brother Sean Preston cost $100,000 to redo in blue and a large SPF (yes, their initials) stenciled on the wall.

Just imagine self-control-challenged supermodel Naomi Campbell in the clink with a gaggle of tough chicks – it could happen, if she doesn't show up for her next court date November 15. Yesterday, in Manhattan Criminal Court, an annoyed Judge James Gibbons said he would have Campbell arrested if she fails to show as she did on Wednesday. Campbell was due in court for allegedly throwing a cell phone at her then-housekeeper Ana Scolavino, hitting her on her back of the head and requiring Scolavino to get four stitches to close the wound. Interestingly, the judge actually asked the prosecutor in the case whether he would like for him to issue a bench warrant, leading to an order for Campbell's arrest, but the prosecutor declined, saying that a plea deal was being worked out.

Olsen Twins Do Love Them Some Jerky and Tabs

Though it may occasionally appear that they get by on a diet of air and , the Olsen twins apparently get a hankering for junk food just like the rest of us, especially when they have to suffer the indignity of flying commerical airlines like the hoi polloi, as Lloyd Grove reports. A Grove spy saw the two multi-millionaires at a Hudson news pre-boarding the other day: "They took forever, buying a big bag of beef jerky, three large rolls of LifeSavers, two packs of gum and a copy of every tabloid magazine," according to the witness. But they're not too common to give a fan the conversational brush-off: A guy in line asked if they knew a common acquaintance, to which they replied 'yes' and walked away without another word.

Star Jones and her husband Al Reynolds really are trying to sell their Manhattan triplex apartment, and they decided to renovate after the pad failed to attract a buyer the first time around. They're still asking $2.5 million, according to the New York Post ... Charlie Sheen will be the best-paid comedy star on TV, says the Hollywood Reporter, after he finalizes his new salary with Warner Bros. Television that will pay him around $350,000 - $400,000 per episode for CBS' "Two and a Half Men" ... A man named Scott House from the island of St. Martin has snapped up almost all the furniture that Paris Hilton put up on starstyle.com to fill his oceanfront manse. "She's got good taste," said House to Rush & Molloy. "I like her style."