An emotional prayer vigil was held yesterday in Clearwater, Fla. for John Graziano, the 22-year-old marine who was critically injured in Nick Hogan's car crash on Sunday night.

"He is still in very critical condition, but coming out little by little. He is in the ICU and we need people to continue to pray," said Ashley Berry, Graziano's girlfriend. Also in attendance, Graziano's sister Christian, who said, "We have complete faith that he is going to recover and be completely fine." No one from the Hogan family showed up at the vigil, but Ashley said they have been by Graziano's bedside since the accident.

Local defense attorney J. Kevin Hayslett has been hired by the Hogan family. TMZ contacted him today but he refused to comment on the investigation. 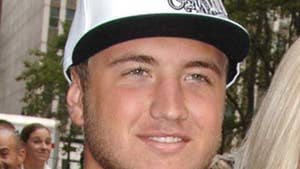