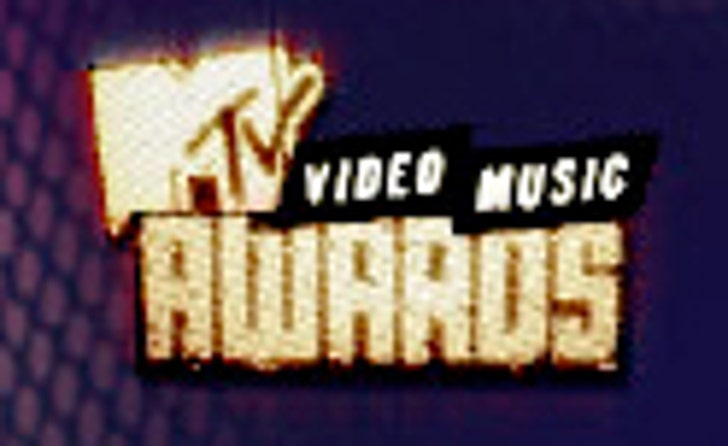 Intern Hallie is back... and in Vegas to live blog the 2007 MTV Video Music Awards. Please enjoy!

This is CRAZY! I am in the photo lounge located in the Palms Casino Resort's main ballroom. The show hasn't even started and I have already seen 50 Cent and Akon taking pictures with fans. Robin Leach was in line at the press check-in. "The Hills" girls Audrina Patridge and Whitney Port were walking around the casino downstairs. Audrina was carrying a large pizza. Funny, I didn't know she ate!

While I was waiting in line to pick up my credentials, an MTV PA asked me and my friend, "Are you two cocktail waitresses?" I guess that means we fit in! Unfortunately, I won't be serving drinks to the rich and famous. I will just be serving up some dirt.

I am sitting with bloggers and writers from US Weekly, People Magazine, Reuters, AP, the L.A. Times. This sure beats watching the show from home! I am about to head down to the red carpet, so keep refreshing TMZ.com for the scoop.

The red carpet was supposed to begin at 2:00 PM. That was an hour and a half ago. I am still plopped in the photo lounge. Slowly but surely, press is being escorted to the red carpet. It is a scorching 100 degrees outside. Unfortunately, we won't see the celebs with beads of sweat. The red carpet is inside the casino.

Security is HARDCORE. It was a next to impossible getting to my table on the red carpet. Luckily, TMZ has a reserved spot. Nicole Scherzinger just walked by and she is stunning! I have my lovely assistant Jenn taking pictures. She's an amateur photog but she is doing GREAT! Unfortunately, I can't type and photograph at the same time. 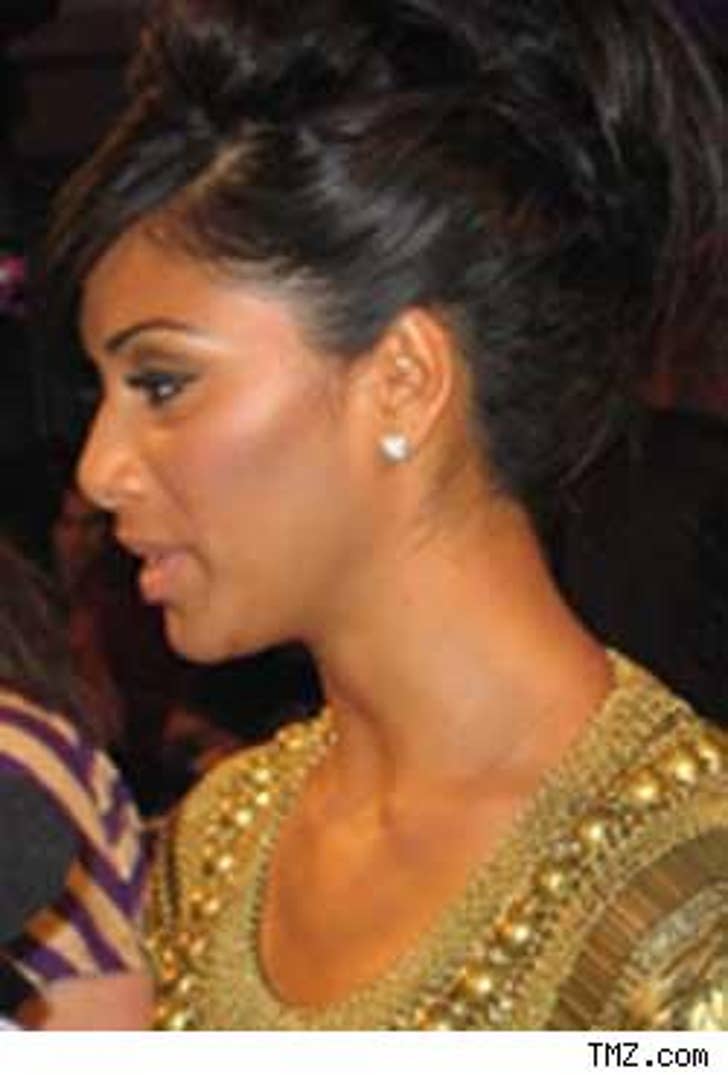 The Real World Sydney cast is walking by right now. Holy MACKERAL! Shauvon's cahoongas are even bigger in person. Or wait, is that Trisha?

Beauty queens are taking over the carpet now! AHHH!!! Stay tuned for the pictures.

Fall Out Boy's Pete Wentz is tiny! I am not particularly tall and in heels, I pretty much towered over his little head. 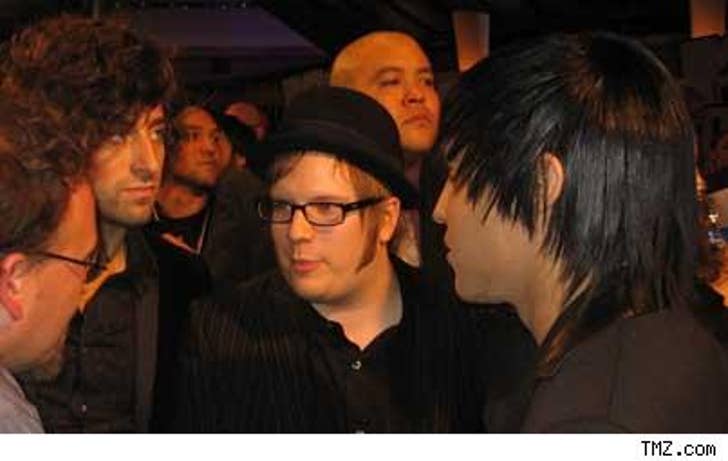 However, he is damn good at straightening those emo locks.

The Palms owner George Maloof is a self-proclaimed "huge fan of TMZ!" I got a chance to ask him a couple of questions. George says he has seen Brit rehearse and "she looks great" and then he took it back. He said she looks "blankin' great" Feel free to fill in the blank.

4:43 PM PST We got Britney's hitmaker

Sean Garrett , who has produced a number of tracks for Britney Spears' new album, says, "The best is yet to come." 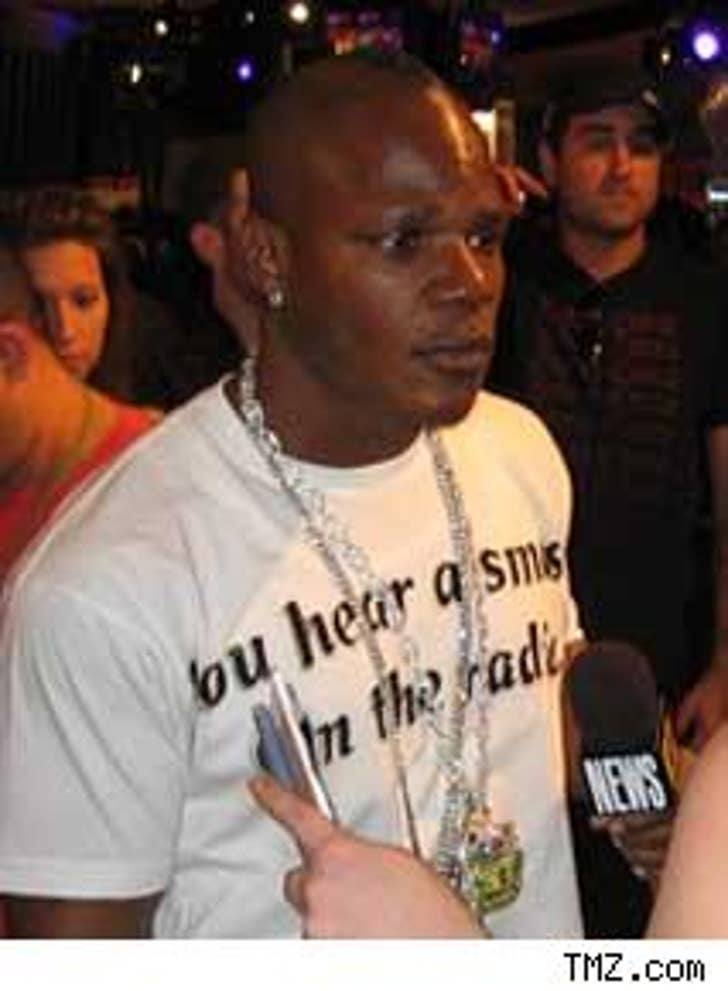 He was unable to reveal the names of the tracks he worked on, but Brit's new single "Gimme More" is not one of them. The duo worked together in L.A., Miami, and Atlanta.

Even though the red carpet is air conditioned and completely isolated from the 100-degree heat, celebrities still sweat! Cee Lo, one half of Gnarls Barkley, has his very own cue ball blotter.

Oh the perks of fame!

Levell Crump er ... David Banner (shh, don't tell him I told you his real identity) is sans a lady on his arm this evening. However, his arms are covered in bling. He is sporting a watch covered in diamonds that features six different time zones. I have been looking for one of those! His album "Greatest Story Ever Told" hits the shelves soon. The CD features collaborations with Chris Brown, Lil Wayne, Snoop, and Akon ... just to name a few.

Is there anyone that he didn't collaborate with? David said Sammy Davis Jr. couldn't make it in to the studio.

Shar Jackson, Kevin Hart, and Warren G of MTV's "Celebrity Rap Superstar" pimped their new show to TMZ. Shar's tots were out to play and she looks fabulous.

I asked the crew why I should tune in, and Kevin promptly said, "because I am damn sexy!" I told him we knew that already, so why else should people watch? Shar spoke up and said that she had never rapped a day in her life, and she had three days to learn a song and then perform it live. Should be a hoot! Warren didn't say much, he might have grunted a couple of times but "Celebrity Fit Club" does a body good!

Mel B has got some nice junk in the trunk. Hopefully, "Dancing with the Stars" won't empty some of that out.

Nelly Furtado is sporting a new orange blonde hairdo but didn't take much time to talk to the press.

Mary J. flew by faster than a blue jay.

Alicia Keys is rockin' a Lara Croft tomb raider braid. Stand back. You don't want to get hit by that thing!

Travis and Shanna Moakler together? What? Huh? The two were holding hands and VERY smiley!

Sarah Silverman refuels on the red carpet with sugar free Red Bull. So that's how celebs stay perky for the camera!

Oh and Shia LaBeouf gave me a head nod. I just melted.

5:40 PM PST It is a can of celebrity sardines in here!

Nelly Furtado walked by for a second time. She was very lovey dovey with her new hubby!

Ashanti looks glittertastic with her mama by her side. Pam Anderson has perfectly penciled eyebrows.

Ludacris looks like a million bucks. For him, that is probably an insult. Chris Daughtry is rockin' a sparkly black suit and Pharrell is hotter in person! Jennifer Garner and Jamie Foxx would make really pretty babies.

Poor Britney. It's official. She's a lost cause. 'Nuff said.

Kanye vs. Fifty! Aww snap! I can feel the tension.

Wait. Why did Beyonce and Shakira win? That song is absolutely horrible.

If there is one cause that Mr. Timberlake is really passionate about, it is definitely more music videos. Give the man what he wants! MTV rarely plays videos anymore. It is a sad, sad world.

7:20 PM PST The Hills are alive with the sound of flashbulbs.

Akon and "The Hills" girls have graced the photo lounge with their presence. Don't you just love reality television? Making stars out of everyday Joes since the early 2000s!

Welcome back Alicia! Lookin' good, girl! And in comparison to the lip syncher who opened the show, she really looks hot.

Natural locks are better than weaves any day!

Common just entered the photo lounge and I accidentally let out a loud "woot." Oops. I guess you are supposed to be awkward and quiet in here. That was little bit embarrassing. He is one of the few people who can pull off wearing extremely dark aviators indoors.

Just in case you didn't hear, "The Kingdom" is in theaters September 28.

Go Rihanna! Girl is taking home the Video of the Year award. I was banking on JT since "What Goes Around" is like a 9 minute movie. Plus, it had the Scarlett cameo!

Nelly Furts and Timbaland make sweet sweet music together. Ahh, I love it. WHOA! Look at those guns! Damn, Timba! He's been spending long hours in the gym for sure.

I was hoping Justin would break out his dance moves. That man is beyond sexy.

I couldn't have said it better my self Sway, "That is how it is done!" Except for that whole "Britney is back" thing. Not so sure about that one.

Rihanna swung by the photo lounge to pose for the cameras and grab some grub. The VMA winner looks smokin' in her hot pink dress. She indulged in some goodies from the press food table. Now I don't feel so bad for having a cookie.

8:38 PM PST I didn't even think it was possible to be that good looking

Justin Timberlake. WOW. The man is actually better looking in person. It is truly impressive. JT took home the most awards this evening and took time to pose solo and with Timbaland.

How do you top seeing Justin Timberlake in person? You hit up the VMA after parties!