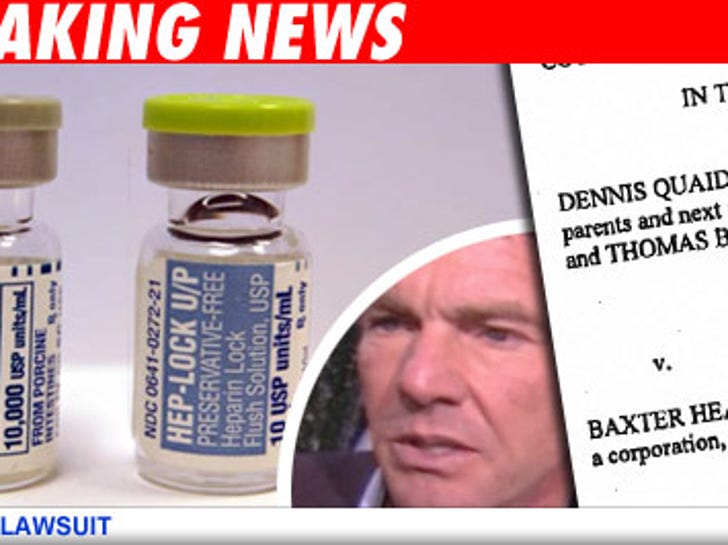 Actor Dennis Quaid and wife Kimberly Buffington have filed suit against Baxter Healthcare Corp., the makers of the drug Heparin. 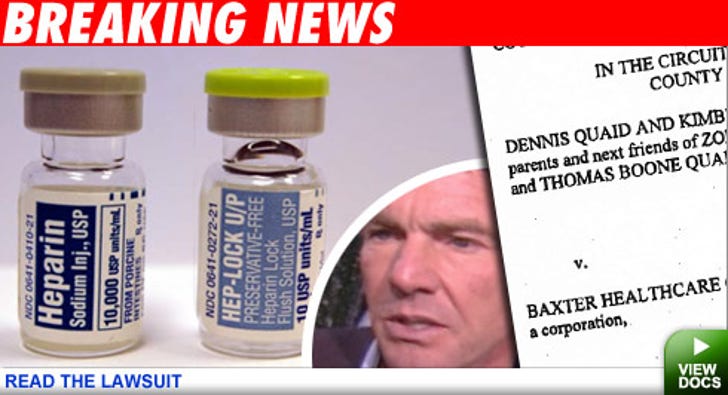 The couple's newborn twins Zoe Grace and Thomas Boone were mistakenly given a massive overdose of the anti-coagulant drug last month while hospitalized at Cedars-Sinai Medical Center in L.A. The Quaid's attorney says the twins "were very critical for a while," but appear to have recovered and "everything looks good." They filed suit because they want to prevent this from happening to any other children, Loggans said. The suit claims the Baxter is liable and negligent because the packaging of the 10 unit vial of Heparin looks almost exactly as the 10,000-units-per-milliliter vial of the drug.

Three children died in Indiana from a similar mix-up with the drug.

We're told that the Quaids have not sued Cedars ... yet. Just yesterday, Baxter issued a news release outlining the company's new "drug safety initiative" that promises to change the labeling of Heparin vials.

Cedars-Sinai Medical Center today announced a series of changes it has made in its medication policies and protocols since November 19, as well as immediate additional training of all nursing and pharmacy staff, as the medical center completed its preliminary investigation into a November 18 medication error involving three patients who erroneously received the wrong concentration of heparin (a medication used to prevent blood clotting) to flush their IV catheters.

The medical center's investigation found that preventable errors made by pharmacy and nursing staff caused the wrong concentration of heparin to be used.

As a result, the higher-concentration heparin was placed in a location in the pediatrics unit where the lower-concentration heparin is kept. The nurses who subsequently administered the heparin to the patients also did not follow hospital policy of verifying the correct medication and dose prior to flushing the intravenous site.

"Although this was a rare event, and attributable to human error, it is also an important opportunity for the entire institution to explore any and all ways we can further improve medication safety," said Michael L. Langberg, M.D., chief medical officer at Cedars-Sinai Medical Center.

"On behalf of the medical center, I extend my deepest apologies to the families who were affected by this situation, and we will continue to work with them on any concerns or questions they may have. This was a preventable error, involving a failure to follow our standard policies and procedures, and there is no excuse for that to occur at Cedars-Sinai," Langberg said.

"Cedars-Sinai's reputation as a quality and safety leader nationally is due in large part to an organizational culture of continually improving our systems to minimize any chance of human error. Immediately following this incident we began additional focused education on medication safety to augment our regular training, and have implemented additional procedures and protocols for our pharmacy and nursing staff," Langberg said.

Among the actions Cedars-Sinai has taken in response to the incident:

â High-concentration heparin (10,000 units per milliliter) has been further sequestered in all pharmacies.

Starting on the evening shift of November 20:

â All nurses (approximately 1800) were re-trained on high-alert medication policies and practices, and were required to pass a written test on the material before they could resume caring for any patients.

â All pharmacy staff (approximately 200) were re-trained on high-alert medication policies and practices.

â The individuals involved in this incident were immediately relieved of duty pending investigation, and appropriate disciplinary actions are being taken.