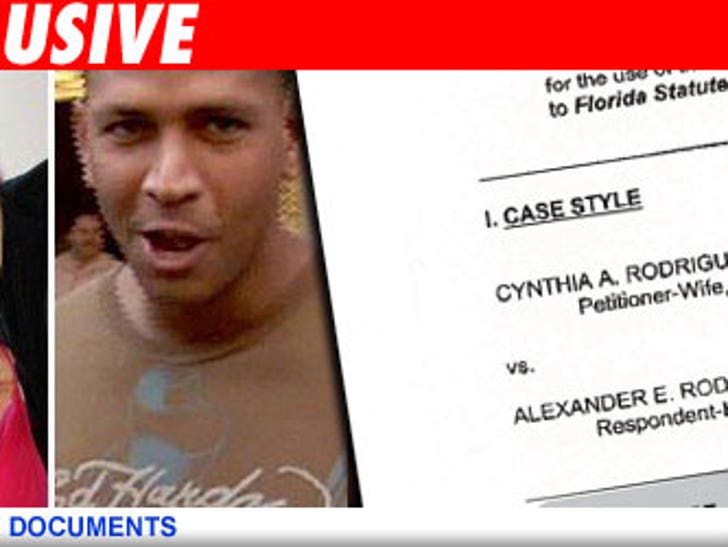 Cynthia Rodriguez has officially filed for divorce from Alex Rodriguez. 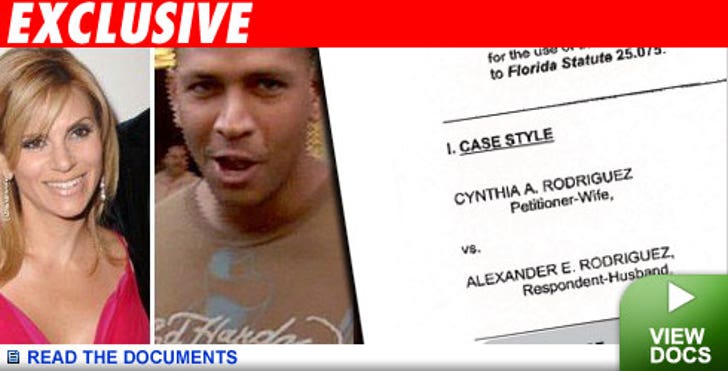 In the documents, filed today in Miami, Cynthia says she's exhausted every effort to salvage the marriage. Alex has "emotionally abandoned" his wife, leaving her with no choice but to divorce him.

She says the marriage is "irretrievably broken" because of Alex's "extra-marital affairs and other marital misconduct." Note she said affairs -- plural.

She's seeking primary custody of the couple's two girls, Ella and Natasha, as well as child support to "maintain the existing lifestyle of the children." That includes life and health insurance and private school.

Cynthia says her man, a "prominent athlete" with "substantial earning power," has the "fiscal capacity to continue his high style of living" but she does not -- hence she's asking for alimony. She is asking to keep their $12 million, six-bedroom estate in Coral Gables, Fla. (and everything in it), as well as her sweet ride -- a Maybach.

She's also asking A-Rod to pay off their debt, as well as her attorney's fees.

The papers mention that a prenup was signed before the couple married in November 2002. Earle Lilly, one of Cynthia's lawyers, told TMZ last night it's too early to know if they will challenge the prenup. A lot is on the line, because A-Rod is reportedly set to rake in $445 mil over the course of his career.

As we first reported, Madonna's name will not be in the divorce papers, but Cynthia's attorney, Earle Lilly, says A-Rod's relationship with her was "the last straw."