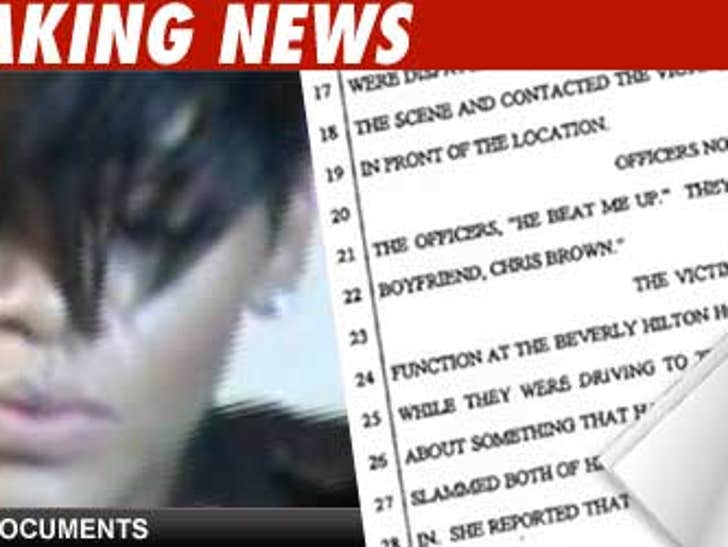 The court has released the officer's report from the night Chris Brown beat up Rihanna -- describing the entire incident in graphic detail.

According to the report, cops responded to a "screaming woman" -- and when they arrived, they noticed a "very upset and crying" Rihanna seated in the driver's seat of a parked vehicle. 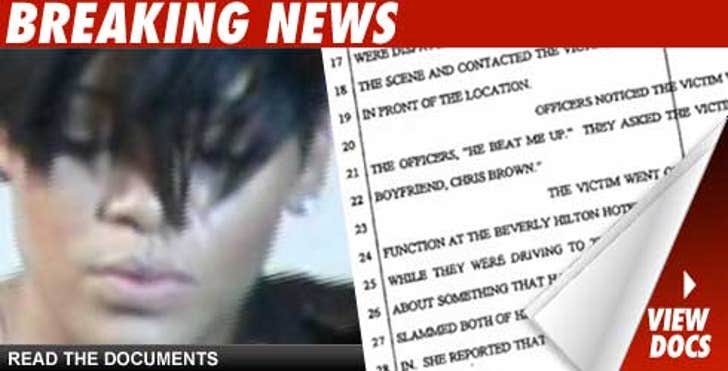 Rihanna told the officer she got into an argument with Chris Brown over something that had occurred at an event they were at earlier in the evening.

"The victim said she became enraged and slammed both of her fists against the dashboard on the passenger side of the car they were in. She reported that the defendant then pulled the vehicle over and reached over her with his right hand. He opened the car door and tried to force the victim out."

According to the report, Brown was unable to shove Rihanna out of the car because she was wearing a seatbelt.

The report continues, "When he could not force her to exit, he took his right hand and shoved her head against the passenger window of the car. "

"The victim then faced the defendant and he punched her in the left eye with his right hand. He then continued driving."

"As he drove, he continued to punch the victim in the face with his right hand while steering the vehicle with his left hand."

Rihanna told cops the "assault caused her mouth to fill with blood and blood to splatter over her clothing and the inside of the car."

Rihanna told cops after Brown "stopped his first assault .. she looked in the mirror and saw her eye beginning to swell.

[Brown] looked at [Rihanna] and said 'I'm going to beat the shit out of you when we get home! You wait and see!'"

Rihanna told police she tried to call her personal assistant, but she didn't pick up -- but Rihanna says she "pretended to talk, saying, 'I'm on my way home. Make sure the cops are there when I get there.'"

Rihanna says she pulled the act "because she did not want to get beat anymore."

But after Rihanna's fake phone conversation, she claims Brown "looked at [Rihanna] and said, "You just did the stupidest thing ever! Now I'm really going to kill you!"

Rihanna told cops that Brown unleashed a second wave of punches, "during which time [Rihanna] interlocked her fingers behind her head and brought her elbows forward to protect her face." He continued to punch her on her left arm, which caused a contusion on her left tricep.

At that point Rihanna tried texting her assistant. Brown threw the phone out of the car, stopped the vehicle and Rihanna then tried opening her door to get out, but Brown sped off and the door shut with Rihanna inside.

Brown placed Rihanna in a headlock while he drove, then bit her on her left ear. The car eventually stopped and Rihanna took the keys out of the ignition, and Brown began to punch her again in the face and arms. He placed her in a headlock and started applying pressure to her carotid artery. She couldn't breathe and began to lose consciousness. She tried freeing herself, and Brown bit her left ring and middle fingers and then released her.

Rihanna took off her shoe and tried breaking the passenger window, and he continued to punch her.

Eventually, Brown got out of the car. Rihanna opened the door and continued screaming. Brown began punching her again. He got back in the car and screamed "Where are my f***ing keys?" He got out, looked for the keys in vain, and when he could not find them removed several CDs and walked away.

Officers were called and observed numerous contusions and abrasions to Rihanna's face and forehead, as well as bruising on her left arm. There were other injuries as well.

Investigators determined Brown was wearing a large ring on his right hand which caused several of Rihanna's injuries.