Kirk Cameron went to UCLA to convince students that Darwin's theory of evolution is dead wrong ... but when the students challenged the actor-turned-bible-banger to a debate, Kirk appeared to be "unfit" for the clash.

As we previously reported, Kirk headed to campus to hand out copies of a "revised" edition of "On The Origin of the Species" -- in which the author attempts to connect Darwin to Hitler.

During the "event," several students asked Kirk about his thoughts on Darwin. Kirk responded, "I believe that Darwin was absolutely ... that the end game was to make God ... was to remove God from the world view of .. I think that that was the end game."

Here's another of our favorite exchanges: 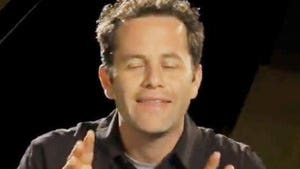