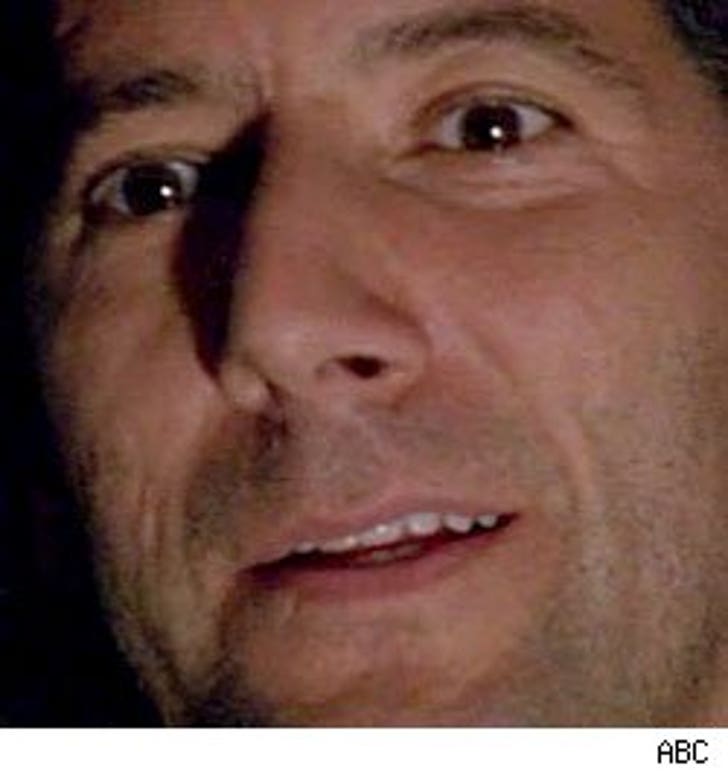 Apparently last week, one of the co-creators of "Lost" tweeted, "In one week, the conversation is going to change." Now, this is different than ABC's promo people telling us "all our questions will be answered." Those people are morons. This is one of the God's of the "Lost" universe reaching down and delivering us this message. Needless to say, I have heard his call.

9:01 -- So much I kind of forgot -- Desmond is married to Penny, they have a kid, and Ben shot him at the pier. You know a show is difficult to watch when you can't remember which dimension certain things happened in.

9:03 -- A giant box hooked up to wires. Anyone else thinking about Ben's "box" from back in the day?

9:07 -- Widmore is strapping Desmond to a chair that is in a box where a guy just got fried to death -- and AFTER THAT, he wants Desmond to make a sacrifice. This Widmore guy doesn't ask for much, huh?

9:08 -- So apparently Widmore needs Desmond to survive a catastrophic electromagnetic event (again) so he can (perhaps) survive another. Apparently Desmond is Superman.

9:10 -- "The test" has triggered Desmond's flash sideways -- and he has met Hugo and Claire in the first few moments.

9:11 -- Desmond's driver is George from the freighter. Ok these little coincidences are fun, but it's starting to get to be a bit much.

9:12 -- Desmond works in an office? He's not married? This is sideways, alright.

9:19 -- Desmond and Charlie are back together. Just like old times.

9:20 -- Charlie and Desmond are talking love about 10 seconds into their conversation. Seems a little contrived.

9:22 -- Charlie's story of love as he nearly choked and died on the plane -- he's talking about Claire, right?

9:25 -- Ok, here's my thing about car accidents in the movies and TV -- the car is careening out of control (in this case Charlie has grabbed Desmond's hands to swerve the car off the road). Did Charlie also grab his foot so he couldn't just hit the break? Gets me mad every time.

9:34 -- Desmond had flashes of Penny and went understandably ape shit.

9:51 -- Farraday is explaining to Desmond, essentially, that they are all having their non-flash sideways lives bleed over into their flash sideways live. Desmond = Penny, Charlie = Claire, Farraday = physics. Sounds like someone got the short end of the stick.

9:55 -- Not gonna lie -- when Desmond introduced himself and shook Penny's hand, and then woke up back in the box, it got a little dusty in here.

9:57 -- Sayid just killed a few people in a few seconds and now Desmond is wandering off with him. Desmond doesn't seem with it.

9:58 -- Desmond asks Penny to get coffee and she agrees. Why is it so dusty in here?

Ok, for anyone who thought "Lost" was dragging its feet and needed to start to bring this plane in for landing (*raising hand) this is the episode that should squash that.

It seems the plane flight has triggered something in everyone -- they now have a glimpse into their lives as they are "supposed to be." At some point, it seems, the timelines will merge. How? No clue.

But I think when they are said and done, the flash sideways timeline will prevail but the Losties will get the good that has come from being on the island. Maybe Charlie gets with Claire, Desmond finds Penny, Sawyer gets the closure from killing the Real Sawyer, Jack becomes a better father, Jin and Sun get together ... and on and on.

After all, the title of the episode was "Happily Ever After."

This was a pantheon episode of "Lost." Immediately belongs in the top tier with "Walkabout" and "The Constant." The argument I was having with my friend Matt -- could any "Lost" fan dislike this episode? My friend Matt hasn't said a good thing about an episode of "Lost" in like four years and he was blown away by last night's ep.

This is a definite A. Didn't have to think much about it. Highly quotable, great acting, a few dusty moments, and a plot that everyone can get with.

I am finally safely ready to say I am ready for "Lost" to end. We're headed on the right track now and I am walking into the light at peace.