Lindsay Lohan was drinking heavily during her 10-hour blondification treatment yesterday in a West Hollywood salon -- and we're told her beverage of choice was some weird, fizzy Chinese tea.

Sources tell TMZ, Lindsay was pounding Kombucha -- a fermented tea that claims several health benefits -- while she got her hair did yesterday at Andy Lecompte Salon in WeHo.

And this is interesting ... due to the fermentation, the tea contains a trace amount of alcohol -- less than 0.5%.

We're told she emerged ten hours later -- and all she could talk about while she was there was some mystery actor she met at Cannes ... with whom she's allegedly obsessed.

UPDATE: TMZ just spoke to the guy behind Kombucha tea, GT Dave, who claims the product can help people kick habits of alcohol, coffee and junk food by "restoring healthy balance to the body." So there. 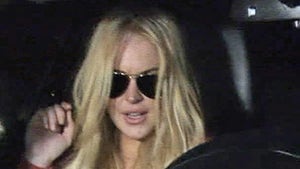 Lindsay Lohan -- Dyeing For a Night Out