Antoine Dodson jokingly tweeted about his arrest yesterday, saying he's never been in jail except for one time in grade school. Wait, that might not be a joke ...

As we previously reported, Dodson was busted in Alabama yesterday on a litany of charges -- possession of marijuana, failing to appear on a traffic charge, failing to have insurance and speeding.

Dodson explained in another tweet, "They so f**king stupid I had just got both cars!!! Why would I have a Benz and SUW with no insurance!!!! Dumb azzez! !Haha!!!"

Good luck with that defense. 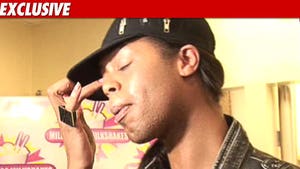 Antoine Dodson -- I've Got My Own Reality Show!