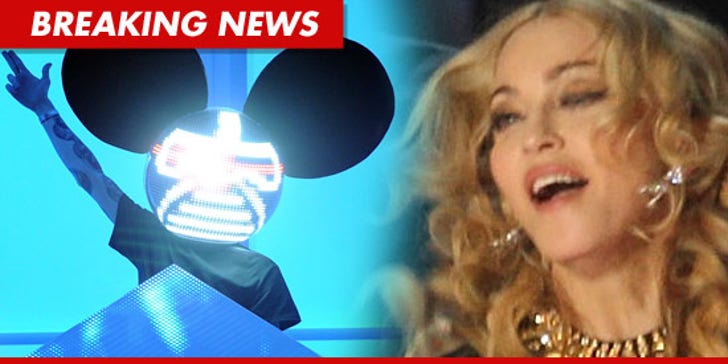 Madonna is under attack by one of the most famous DJs in the world ... who's PISSED at the Material Girl for glamorizing the use of ecstasy during a recent concert.

DJ Deadmau5 was clearly watching when Madge took the stage at the Ultra Music Festival in Miami this weekend and shouted to the crowd, "How many people in this crowd have seen molly?" (check out video below at :45 mark)

FYI -- "Molly" is a slang term for MDMA, one of the key ingredients in ecstasy ... a drug that's hugely popular with people in the electronic dance music community.

While the crowd CHEERED at Madge's comment ... Deadmau5 went to his Facebook page and ripped the singer a new one.

"Very classy there madonna. 'HUR DUR HAS ANYONE SEEN MOLLY???' such a great message for the young music lovers at ultra."

He added, "Quite the f'n philanthropist. but hey, at least yer HIP AND TRENDY! f*cking cant smack my head hard enough right now."

So far, no response from Madonna.