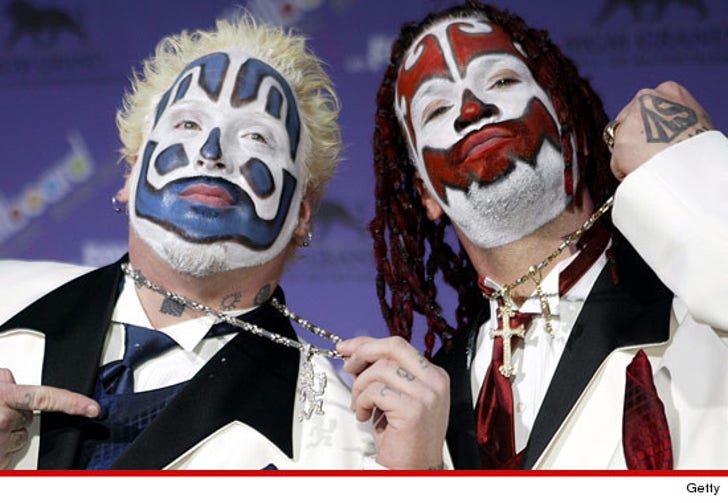 The Insane Clown Posse is straight up pissed at the FBI, yo ... claiming the feds were WRONG for classifying their "Juggalo" superfans as a dangerous street gang ... and now the Clowns have lawyered up, hoping to sue the government.

ICP believes several members of their Juggalo faithful have had their rights violated ever since the group appeared on the FBI's National Gang Threat Assessment list in 2011.

The feds believe "many Juggalo subsets exhibit gang-like behavior and engage in criminal activity and violence."

But ICP is adamant their fans are getting a bum rap ... claiming Juggalos have wrongly been placed in the same catagory as "such notorious entities as the Aryan Brotherhood, Bloods, Crips and the Latin Kings."

ICP member Shaggy 2 Dope released a statement saying, "We are hearing too many stories from our fans about the trouble [being on the FBI list is] causing them. Just because you like a music group, doesn’t make you a criminal.”

The other ICP member, Violent J, added, “We’re not attacking the FBI, but they got this wrong. The Juggalos are not a gang, and that needs to be fixed.”

ICP has reached out to their fans ... seeking Juggalos who believe they have been mistreated by law enforcement because of the FBI's characterization of the group. The goal is to sue the government for discrimination.