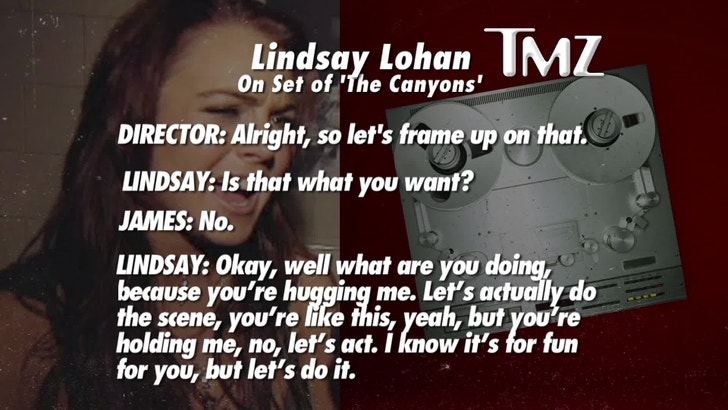 TMZ has obtained an audio recording from the set of "The Canyons" ... in which a pissed off Lindsay Lohan tears into her co-star during a rehearsal ... saying, "Do your f**king job!!!"

During the rehearsal, the director can be heard instructing Lohan and Deen to walk through a scene and "take it all the way to the kiss ... 'cause that's certainly going to be important."

But when the director yells "action" ... something goes wrong ... and a frustrated Lindsay explodes:

James tries to respond to Lindsay, but she cuts him off ... saying, "I didn't say anything, I said just walk over ... and do your f**king job."

Lindsay responds, "So have I."

As we previously reported, Lohan was reportedly a nightmare on the set ... who was constantly late to set ... fought with co-stars and producers ... and drank on the set.

Lohan denies she ever boozed during production ... but says everything else is pretty accurate ... and the audio definitely proves it.