Coolio put on the ultimate acoustic performance last night ... busting out "Gangsta's Paradise" while chillin' on a couch in a college kid's living room ... while a student with a guitar strummed out a beat.

The rapper was in England to play a gig -- and met a couple of University of Central Lancashire students in the V.I.P. area.

We spoke with one of the students, Lorcan, who posted his account of the night on Reddit ... and he tells us Coolio liked the kids and offered to cook the gang dinner (he's a big-time chef nowadays).

After stopping by a grocery store to pick up the ingredients for a caprese salad, a peach crumble and something called "Chicken á la Daaaamn" ... Coolio decided to treat the kids to a rendition of his biggest hit ... and it was awesome. We're told Coolio paid for everything.

After the performance, the student said Coolio was a "great guy" ... who "had some very deep and profound thoughts on life and his time in the business."

The whole thing is pretty awesome -- check out the clip. 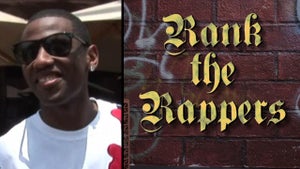 Fabolous -- The Best Rappers of All Time Are...