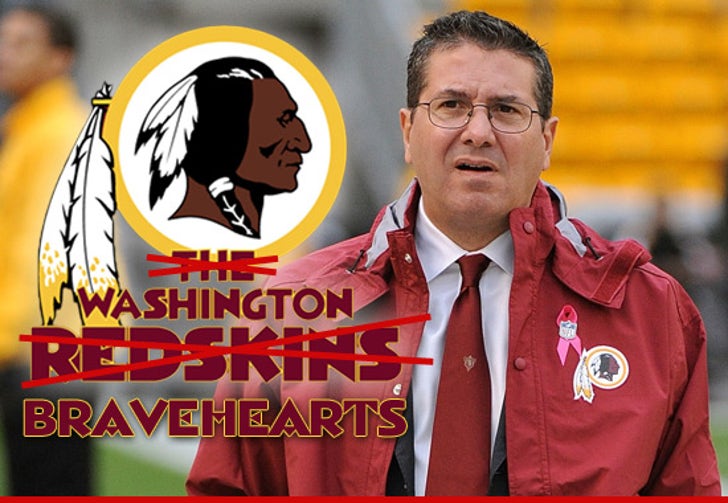 ﻿10:07 AM PT: ﻿So get this. We finally heard back from a rep for the Redskins. He said there's no connection between the Bravehearts trademark and the Redskins. He also said Dan Snyder doesn't know the man who filed the trademark. We informed the rep they're neighbors on the same street ... the rep added: they still don't know each other.

Something curious/suspicious is going on with the Washington Redskins ... there's evidence the owner might be caving to pressure to change the name.

Here's what we know. Redskins owner Dan Snyder lives in Potomac, Maryland, a few doors down from a very rich dude, Aris Mardirossian. Aris, a wealthy patent investor, registered the name, WASHINGTON BRAVEHEARTS on October 17th. According to the Trademark application, obtained by TMZSports, Aris plans to use the name for "Entertainment in the nature of football games."

As for the relationship between Aris and Dan, we're told the 2 of them formed a united front on their block a few years back -- both men wanted to cut down trees on their lots but they were being blocked by the county.

Also, we found out both Snyder and Mardirossian attended the University of Maryland ... just at different times.

With all the hubbub over the Redskins name, it's more than curious that a man who has nothing to do with football would suddenly register the name of a football team that would solve his neighbor's problem.

We've made numerous calls to everyone involved, and almost everyone who spoke to us was tight-lipped and would not broach the subject. Aris flat out hung up on us. As for the Redskins, we've made multiple calls but so far, no word back.