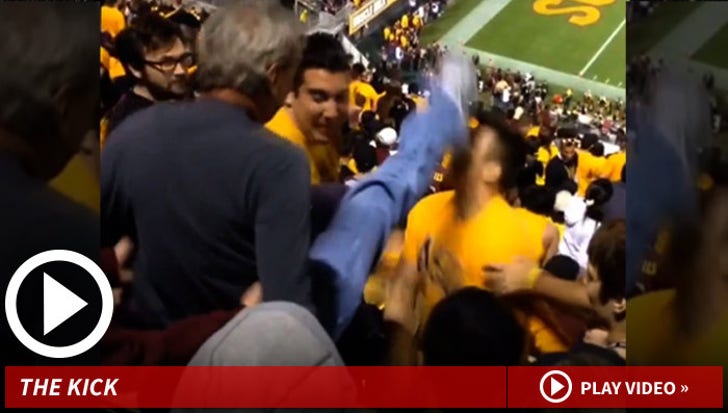 The old man who booted an Arizona State fan in the face at Sun Devil Stadium last weekend "GOT DESTROYED" after the camera turned off ... sources involved in the situation tell TMZ Sports.

The video of the initial incident has already gone viral -- showing an old man delivering a BOOT to the face of a young ASU fan during the ASU vs. U of A game in Tempe this past weekend.

Moments after the blow, you can see ASU fans swarm the old man ... and then the camera shuts off.

Now, sources directly involved in the incident tell TMZ Sports ... the old man "got what he deserved" when several ASU fans pummeled him right in the stands.

As for how the whole thing started ... we're told, "The old man was yelling at some undergrads and some girls. He was told to 'shut his mouth.'"

"The old man took offense. He kicked. He then got what he deserved. He was destroyed."

We're also told security rushed to the scene and "[the old man] and his redneck family were kicked out." The ASU fans were allowed to stay in the stadium.

Sources say it appears the old man was a U of A fan because he was wearing blue -- one of the school's colors.