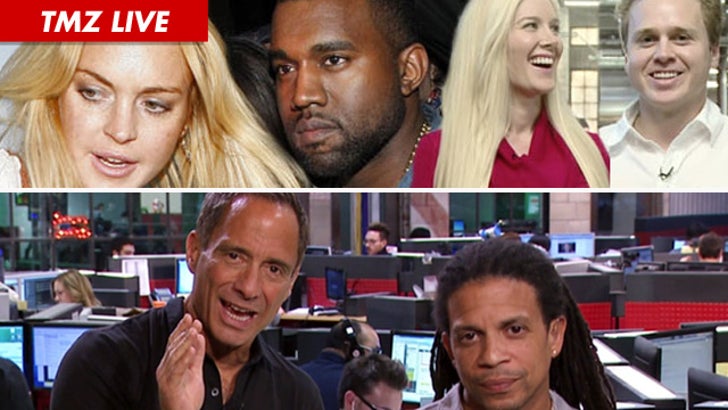 TMZ Live
Lindsay Lohan could have a new legal nightmare ... courtesy of Paris Hilton's brother. Barron Hilton's talking lawsuits after getting bashed in the face by one of LiLo's pals -- and an arrest is about to happen. How's that comeback story looking now, Oprah?
Plus, Kanye West might finally have gone too far -- saying his job, as a rapper, is as dangerous as being a police officer? Hope he doesn't need security anytime soon.
And, Heidi Montag and Spencer Pratt join us explain how they managed to blow through $10 million -- and how they plan on making it back.

(0:00) The Lindsay Lohan drama train is back -- Paris Hilton's little brother Barron accuses her of orchestrating his butt-kicking at a drug-fueled party.
(6:30) "Fast and Furious 7" will go on without Paul Walker -- meanwhile, a guy who tried to sell pieces of burnt bark from Paul's crash site sees the error of his ways.
(10:00) Kanye West says being an entertainer is like being a police officer or fighting in a war ... do you think he actually believes himself?
(14:00) Ryan Seacrest turns everything into gold -- even women he's casually dating.
(18:00) Heidi Montag and Spencer Pratt joins us to talk about their epic fall from fortune ... and how they plan on getting it back.
(24:00) Justin Bieber admits he's not a man yet and should be forgiven for his actions -- you buying what he's selling?
(29:00) Two young stars of "Annie" are set to make a lot of money -- would you let your kids be celebrities knowing negative side of child stardom?
(32:00) Miley Cyrus is on the shortlist for Time's person of the year ... and some people actually think she deserves it.
(36:00) The floor is yours!
(41:00) The real-life guy from "127 Hours" is popped for domestic violence ... and we have all the details.