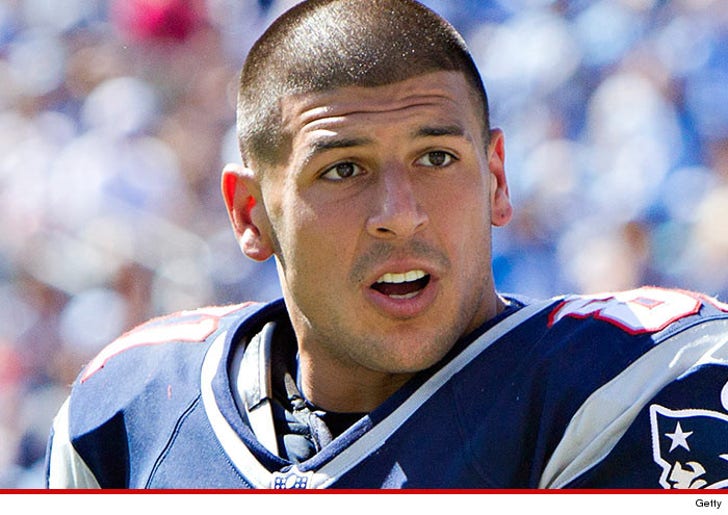 Aaron Hernandez is being investigated for allegedly threatening to shoot and kill a guard at Bristol County Jail late last year ... though one of the NFL star's fellow inmates says it just ain't true ... TMZ Sports has learned.

We know ... investigators recently met with an ex-inmate who was locked up near Hernandez at BCJ to discuss a 2013 incident between the former New England Patriots tight end and a correctional officer.

During the questioning ... investigators asked if Hernandez had threatened to kill the guard -- who blew the whistle on Aaron when he was trying to deviously score extra food inside the joint.

(Note -- The ex-inmate told investigators Aaron was noticeably losing weight in jail and would run various schemes to get extra food ... like putting an insect on a half eaten meal and then complain to officials so he could get a fresh serving. But the ex-inmate claimed Aaron pulled his schemes "one too many times" which pissed off the officers ... who put an end to the extra food.)

Among the questions investigators asked the ex-inmate -- did Aaron ever say anything to the effect of ... when he gets out of jail, he's going to "kill the guard and shoot his family."

They also want to know if Aaron ever made a noise like a "machine gun round" to the guard.

The ex-inmate was adamant Hernandez NEVER threatened the guard ... though he did claim Aaron called the guy a "bitch" during the heated exchange.

Hernandez was "written up" over the incident.

We placed multiple calls to Bristol County Jail officials to find out where things stand with the investigation -- so far, no word back.