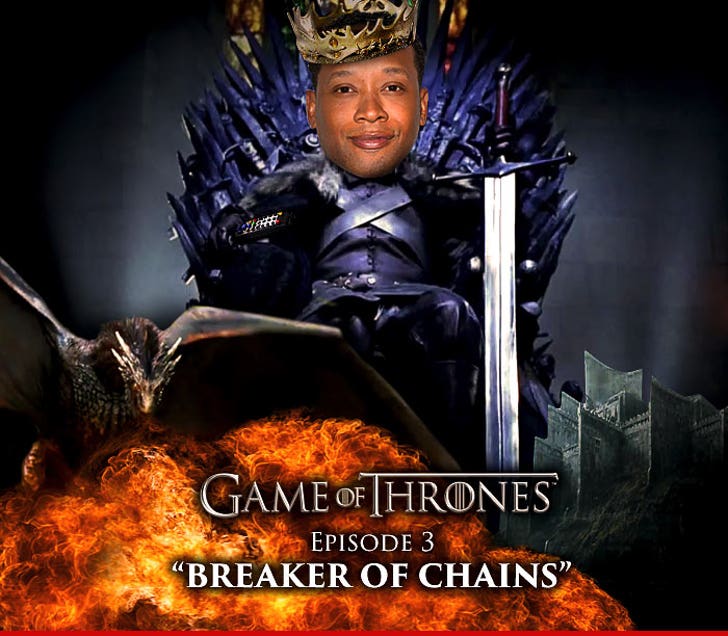 "Breaker of Chains" starts frantically enough with Sansa Stark fleeing Westeros, finally. At least that's what we think, until we see that her rescuer is none other than Lord Baelish.

Yeah, just have to hope this ends well. Of course, one of the most shady characters on the show is posted on a boat surrounded by fog. Good luck, Sansa ...

Next we cut to the Tyrell's lounging at their favorite coastal meeting point in Westeros. You gotta love these folks. Joffrey's body isn't even cold and they are already plotting to put Margaery in another king'as bed. It's queen or bust for them, clearly.

The Tyrell's ambition has nothing on the Lannister's deadly desire to continue to rule. Time is of the essence, as Tywin couldn't wait to start educating the new king about who's really in power. He won't have another Joffrey on his hands, if he can help it.

Poor Joffrey. Poisoned dead, yet his parents see fit to have a wild romp at the feet of his dead body. Jaime & Cersei Lannister, their tangled web is just getting stickier.

I don't know about you, but I've been Team Arya from day one. We catch up with the little one as her adventures with the Hound (Sandor Clegane) continue. For a second, it appeared that our wayward two were going to be settling down. For a second. Who would have thought that the Hound, a person on Arya's kill list, would be a valuable teacher? Stay tuned.

There aren't a ton of characters on GoT that you openly root for. Sir Davos is likely one. As the Hand of Stannis Baratheon, you just want things to work out for him. Appears he may have a plan. This should be good ...

My vote for saddest scene of the week goes to Sam & Gilly. Heavens, will they ever happen? I get the Knights Watch vow, but can't Sam get some love? Sheesh. I know Sam believes he's doing the right thing, but homie, you didn't leave Gilly at the safest spot.

Back to the aforementioned Tywin Lannister as he visits Prince Oberyn of House Martell to basically make him an offer that he can't refuse. Prince Oberyn knows they need him, but he also knows to watch his back. Tywin, he's got his hands in everyone pockets.

Man, they love to knock a little guy down. Tyrion is already sitting in a dungeon being charged with poisoning the king. Now, he loses one of his closest confidantes in Podrick. It will be interesting to see how, or if, he gets out of this.

HERE COME THE WILDLINGS! Clearly on a mission of destruction, the boys at Castle Black better get a plan together quick.

We close the show with Mother of Dragons, Daenerys Tagaryen (or Khaleesi) as she looks to liberate another city of populated with slaves. First, how bad ass is Daario Naharis? Dude handles business, with deadly accuracy. Khaleesi has a plan, it's called political warfare. Firing cannons full of shackles at the slaves, clever. Looks like another city will fall to her.

However, I'm still a bit salty that we didn't get to see any dragons.

As usual, a lot packed into one episode.