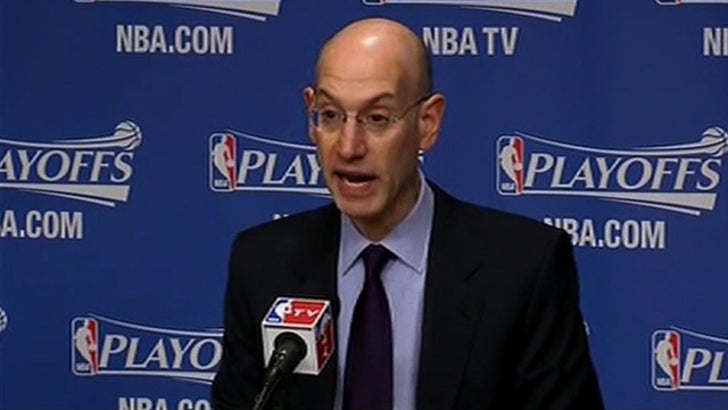 In the wake of Donald Sterling's racist comments on an audio recording ... he is persona non grata at his own team's playoff game ... according to the NBA Commissioner.

Adam Silver said Sterling "has agreed that he will not attend his playoff game [Sunday] in Golden State" while the league investigates the tape of Sterling arguing with his girlfriend.

During his news conference in Memphis ... the commish was surprisingly strong and deliberate with his words -- calling Sterling's comments on the tape ... "truly offensive and disturbing. "

Silver said the league hopes to have its investigation wrapped up in the next few days -- and said they would interview Sterling and his gf V. Stiviano ... and attempt to understand the context of the recording.

He added that Sterling deserves a fair chance to present his side of the story ... and as a result the league was not prepared to even discuss any potential sanctions.

Several people -- in and out of the NBA -- including LeBron James, Shaquille O'Neal, Rev. Al Sharpton, Lil Wayne, and Magic Johnson ... have said Sterling should at least be suspended ... and at worst ... removed as owner of the Clippers.