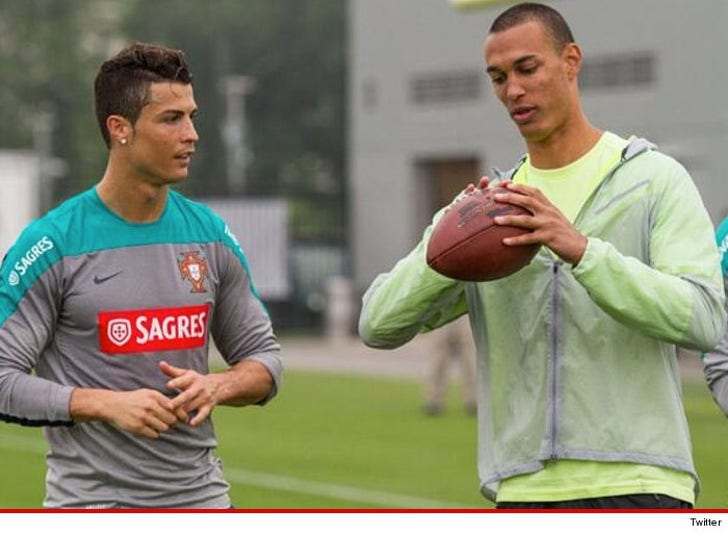 New York Jets wide receiver David Nelson could have a career in QB coaching -- because he taught soccer star Cristiano Ronaldo how to throw a legit spiral ... in minutes!!!

TMZ Sports spoke with Nelson who tells us he was kickin' it with Ronaldo after the Portuguese national team finished practice at the Jets team facility in New Jersey earlier this week.

Nelson says someone threw a pigskin Ronaldo's way and he tried to throw it around -- but he had no idea what the hell he was doing ... ya know, since football isn't exactly big in Portugal.

"He was throwing it around, but he couldn't get it to spiral. He wasn't holding it right. He was grabbing it in the middle and shot putting it," Nelson says.

But that's when Nelson snapped into coach-mode -- "I showed him how to hold it ... how to throw it. For him it was his throwing motion that was weird."

"I was afraid he was gonna hurt himself! I was thinking 'all he needs to do is tear his rotator cuff throwing a football!'"

But after a few mins and some quick adjustments, Ronaldo got the hang of it, much faster than most people -- "I've tried to teach a lot of people how to throw a ball. I've spent 30, 45 minutes and been completely unsuccessful ... but with Ronaldo in literally 4 or 5 minutes, he was night and day. You could tell how athletically gifted he is."

The whole experience was a thrill for Nelson and the Jets -- "It was really cool to see what they do, how they train, how they gear up for competition, how they interact with each other. They gained a lot of fans from the Jets."