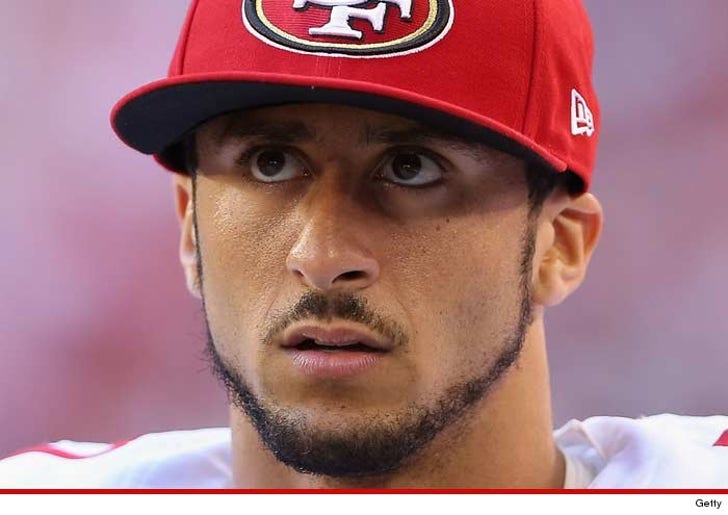 1:02 P.M. PT -- Kaepernick just tweeted his response, "As I said from day one, I would never do the things that were made up about me. I'm glad this issue is resolved. It's time for football."

Colin Kaepernick will NOT be hit with any charges stemming from a sexual assault investigation in Miami, authorities say ... after officials determined there was NO credible evidence he did anything wrong.

The Miami-Dade State Attorney’s Office has announced ... after a thorough investigation, the San Francisco 49ers QB is "exceptionally cleared."

According to official documents obtained by TMZ Sports, prosecutors determined, "There is no evidence to prove beyond a reasonable doubt that any crime was committed against the complaintant."

We broke the story ... Colin, along with 2 other NFL players, were listed as suspects in a police report after a woman claimed she may have been sexually assaulted while visiting the players at a Miami apartment.

Investigators say a rape kit was administered to the woman -- but NO semen was found in her genital area -- and there were no tears or lesions (signs of forced penetration) around her vagina.

Investigators say the accuser was behaving in a bizarre manner at the apartment -- including "banging her head against the bedroom walls and kicking uncontrollably."

According to the report, when officers arrived to the apartment ... the woman was moving her body around as "if she was engaged in a sex act, although there was no one else in the room."

"When she heard the officer's voices, [she] started screaming incoherently about Jesus and devils. At one point, [she] took the wig off her head and threw it at the officers."

Officials say it's possible she may have been under the influence of drugs -- but no traces of drugs were found in toxicology tests conducted by investigators.

Investigators do note that it's possible the woman was under the influence of bath salts -- but toxicology labs "are not always able to find such intoxicants in a person's system."

One week after the woman filed her police report, she spoke with cops and told them that she had prepared her body -- showered and shaved her pubic hair -- because she was planning on having sex with Colin on the night she went to the apartment.

She also said she brought condoms to the apartment that night.

According to the report, officials say Kaepernick and NFL player Ricardo Lockette met the woman in 2013 at a nightclub in Atlanta ... and Colin admitted he had sex with her right around the time they met.

Colin told cops that she called him on April 1st 2013 (April Fool's Day) and told him she was pregnant in an apparent attempt at a gag -- Colin then changed his phone number and tried to cut off contact with her.

She continued to try to contact him on social media -- but he never responded. Officials say they found a video of the woman online in which she was topless and covered in body paint resembling Colin's jersey.

The point -- it seems officials believe the woman had an unhealthy obsession with the football star.

And get this ... investigators say on the night of the alleged incident, Kaepernick was with another woman on the balcony of the apartment and the accuser stripped down naked and confronted them.

Officials say the accuser told the woman who was with Colin that it was not safe to be there. The accuser then went back to Colin's bedroom and Kaepernick left the apartment.

In the end, investigators determined that the accuser didn't have a shred of evidence to prove Colin or anyone else did anything wrong. Case closed.