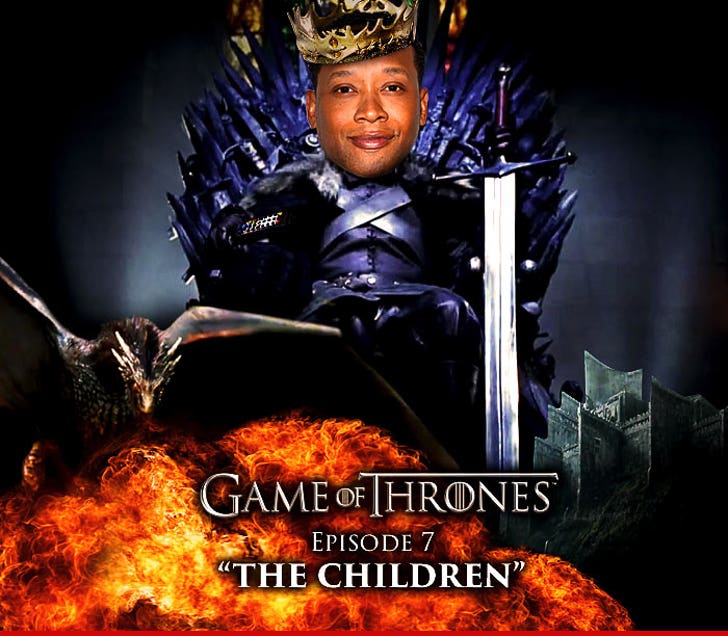 Atlanta Falcons great Jamal Anderson -- the creator of the Dirty Bird -- is a HARDCORE "Game of Thrones" fan ... like, borderline obsessed. So, when we asked him to put together a Monday "GoT" recap, dude was ALL ABOUT IT.

Now that was one hell of a season finale!! In addition to our fine cast of regular human characters, we got Dragons! Giants! Death dealing skeletons! The children! Kick ass HODOR! Sweet!

Last thing before we get into my recap ... Three cheers for Tyrian Lannister! Hell yeah!!!

"Death Marches on the wall, only you can stop it"

True to his word, Jon Snow gets super close to maybe/sort of offing Mance Raydar. During their tent 1-on-1, we finally learn why the Wildling army has been marching towards the wall -- they're trying to survive.

It's looking like an uphill battle -- and I don't mean getting over the wall. After Stannis Baratheon and his army rode them down ... this future doesn't look too bright for Raydar's gang.

The first of many good scenes in our season finale last night. Enjoyed watching the Baratheon army march in and get to work. Stannis is in the North! Just in time for our brothers on the wall.

Cut to a laboratory in King's Landing for our shortest scene of the finale. The first of several scenes dominated by Cersei Lannister. The Mountain lives!!! And apparently, he's gonna be a much MUCH scarier version of himself ... thanks to good 'ol C.L.

"Your legacy is a lie"

We stay in King's Landing with the real boss of Seven Kingdoms, Cersei Lannister -- the place: daddy's office. Time for a confessional. What pleasure she took in breaking the incest news to her pops. Damn, she is no joke. Tywin Lannister's just getting into the WORST. FATHER'S DAY. EVER!

Cersei starts her third straight scene by giving up the nappy dugout to her brother ... again. WELP! She's on a roll and Jaimie is all in, If you know what I mean. You figured they'd be back at each other at some point. Gross.

Off to the Meereen as our Khaleesi is holding court. I doubt in her quest to free slaves did she ever consider some would want they're old lives back. WTF? As if that wasn't crazy enough her babies have gone off the rails. Of course I mean her dragons. And the Mother of Dragons is about to shut them down. They're torching kids now?! That's messed up.

Did you feel a tinge of sadness when those dragons were screaming as the door to the catacombs closed? Ok, maybe not ... they still looked pretty viscous. Thing is, the worst one is still on the loose. Oh boy!

"And now their watch has ended"

As the bodies of the Night's Watchman were burning, you could see her staring at Jon Snow -- red hair and flames ... look out Jon!!! While I'm talking flames, good to see Jon give his girl Ygritte a proper burial. Next season is going to be quite interesting for Mr. Snow. Stay tuned ...

From one member of the Stark Clan to a other we go. The long and perilous journey of Bran Stark is finally coming to a conclusion. Clearly it wasn't perilous enough as Bran and his cohorts get bum rushed by skeletons hell bent on killing. Unfortunately for Jojen, his journey comes to an end in the season finale.

"You'll never walk again, but you will fly!"

Remember, as he touched the Weirwood Tree in addition to several key visions, he was instructed to seek the three-eyed raven in the North. Bran can thank the children, who are not children at all, for helping him complete his quest. And now his training shall begin. Bran will never walk again, but he will fly? Oh yes, next season is going to be something else!

Our run of Stark children continues with our wayward two. On a quest to honor her vows to Lady Stark, Brienne final reaches Arya Stark and The Hound. In an episode loaded with big scenes, the fight between Brienne and The Hound was epic. Brienne is one bad mofo because Sandor Clegane (aka the Hound) doesn't lose fights. But she kicked his a**! Damn, it's been a tough for weeks for the Clegane boys, right?!

While Mr. Hound begs for her to end his life, Arya has other plans. Their long and interesting union has come to an end. Arya won't finish the Hound, but this is hardly the end for our girl. "Valor Morghulis." Arya is off on another adventure. No stopping her now.

As usual, the best of an awesome season finale was saved for last. That Tyrion Lannister is one helluva character. Freed by his brother Jaime & Lord Varys, our little friend doesn't just get out of Dodge. No, Tyrion's got other plans.

Revenge is a dish best served with death! Tyrion got to exact some revenge by killing his lover-hooker-mate. Shae had it coming for crossing the little fella during his trial.

If that wasn't good enough, the end of Father's Day was the end of his father's life. You didn't see that coming did you? Hot damn! Sorry, but I had a small smirk on my face as Tyrion fired those arrows into Tywin Lannister. He had it coming, too. Lord Varys knows the consequences at hand, oh does he ever.

Folks, I've had a blast sharing my thoughts on "Thrones" with you this season. Next season is going to be awesome. The challenge is set, the bar is high, my bet is "Thrones" will deliver.

As they say, Winter is Coming!