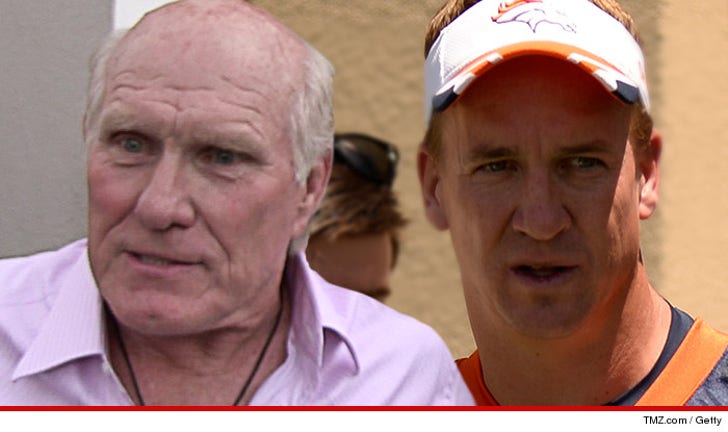 Terry Bradshaw admits his joke about Peyton Manning habitually choking in Super Bowls was "tasteless" ... but he tells TMZ Sports he sure as hell won't apologize for it.

Bradshaw's been getting some heat ever since he took aim at Manning during his 1-man show, "America's Favorite Dumb Blonde" earlier this week and said:

"Peyton Manning, considered the best quarterback to play the game today. Nobody would argue with that -- if you like winning good during the season and losing Super Bowls, that’s your guy."

Now, Bradshaw tells TMZ Sports ... "I got caught up in the moment -- it just popped out."

But he's adamant he wasn't trying to be mean to Peyton -- he was just making a harmless joke -- and says there's absolutely no need to apologize.

"Does Jay Leno call and apologize to people when he makes a joke about them?"

Bradshaw says he respects Peyton as "one of the greatest QBs ever" -- and thinks Peyton will probably think the whole thing is funny.