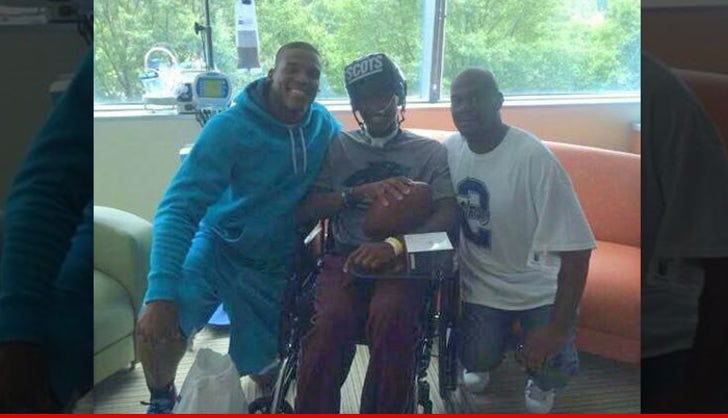 Cam Newton made a surprise hospital visit to a star high school QB who's recovering from a serious brain injury sustained in an ATV accident ... after learning he was the kid's favorite player.

The star QB is Jaylend Ratliffe -- a senior who had been offered a full scholarship to Georgia Tech before fracturing his skull during the July 30th accident.

Ratliffe underwent emergency brain surgery a tracheotomy -- and is now recovering at a hospital in Charlotte, NC.

We're told ... Newton got word of Ratliffe's story through friends at Georgia Tech and decided to pay Jaylend a visit at the hospital on Tuesday afternoon ... bringing Panthers swag and an autographed football.

Cam stayed for about an hour just talking and hanging out with Jaylend -- and according to people close Ratliffe, the high schooler was thrilled.

In fact, Ratlife's family gave Cam a "2 Strong" shirt -- which the fam is selling to raise money for Jaylend's medical bills.

According to the Atlanta Journal-Constitution, it's unclear if Ratliffe will ever play football again -- but Georgia Tech has offered to honor the scholarship offer regardless.