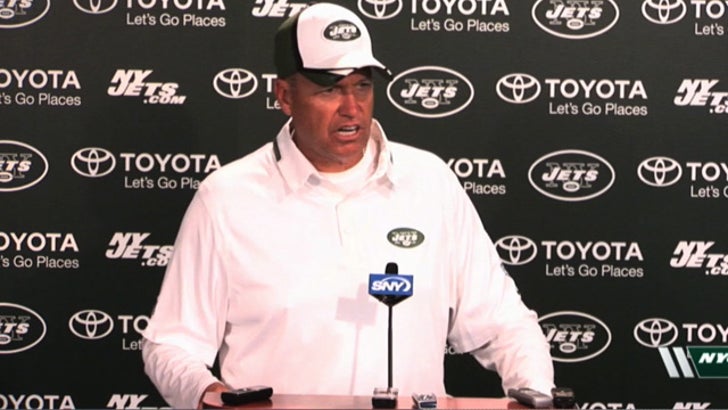 NY Jets coach Rex Ryan is saying the team is keeping a close eye on rookie WR Quincy Enunwa -- who was arrested for domestic violence Sunday -- but says there's a big difference between "accused" and "convicted."

TMZ Sports broke the story ... Enunwa was busted at a hotel in NJ, where he allegedly got violent with a woman during a heated argument. Enunwa plead not guilty to the domestic violence charge.

Coach Ryan addressed the issue during a media conference Thursday and said, "We are aware of it. This is something we take very seriously, obviously."

When asked if he would allow a player to remain on the team after he was convicted of domestic violence, Ryan said ... "There are different things. But, obviously there is a big difference between being charged, allegedly charged, and being convicted."

Ryan initially said the team knew about the arrest before they signed Enunwa to the practice squad this week -- but then backtracked and said:

"You know what, I said that before about the practice squad, I can’t really remember the timetable. I have been so focused on the Raiders. I am not going to get into the specifics of it. I don’t want to give you false information. Quite honestly I don’t remember if it was before the practice squad or not."

As for Enunwa, he's still on the practice squad ... and his domestic violence case is ongoing.