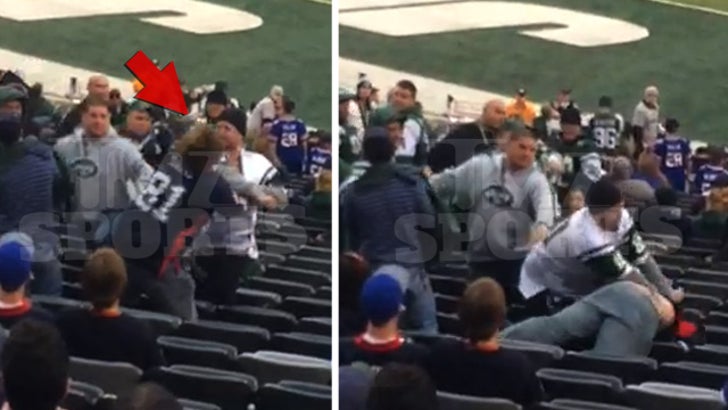 A fight between a NY Jets fan and Buffalo Bills fan at MetLife Stadium this weekend ended in a savage knockout ... with the Bills fan slumping into his seat after being knocked unconscious.

TMZ Sports has the shocking footage -- which shows the two men tussling in the stands during the 2nd half of the Bills vs. Jets matchup ... right after the Bills started pulling away.

You can see the Jets fan take a swing -- and he connects right to the head of the Bills fan ... and the guy immediately is out cold.

According to witnesses, the Jets fan left the scene before security arrived.

One witness tells TMZ Sports, "The Bills fan had been shooting his mouth off before the fight and the Jets fans took exception."

You can see the Bills fan being tended to by other fans -- including another man in a Jets jersey.

We spoke to the NJ State Police who tell us ... the Jets fan was apprehended as he fled the scene and was arrested and charged with simple assault.

We're told ... at the scene, it did not appear the Bills fan suffered "serious injury."

The State Police also tell us they have "very good footage" of the entire incident from their state-of-the-art surveillance system -- and warn others, "Anyone would be a fool to commit a crime inside MetLife Stadium."