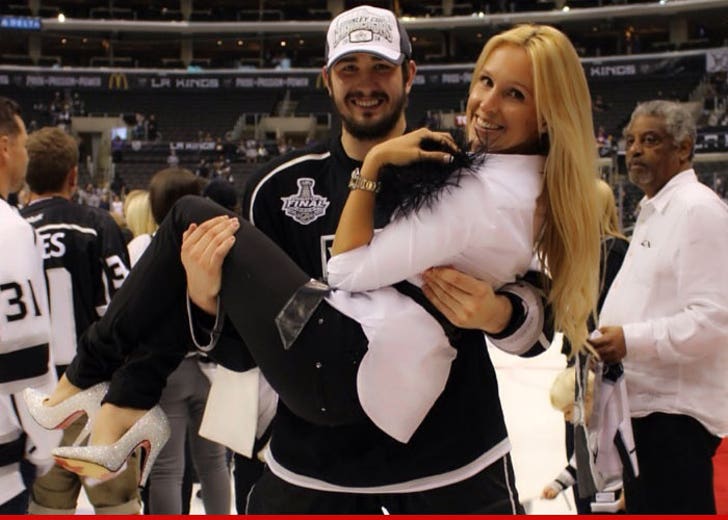 NHL star Slava Voynov's wife pleaded with prosecutors to drop the felony domestic violence case against him because if people like Ray Rice didn't go to jail ... Slava shouldn't either.

TMZ Sports obtained a letter sent by Slava's wife, Marta Varlamova, to the L.A. County District Attorney in November ... and in it she takes all the blame for the argument which she says started during a party at a friend's house where she was drinking -- but continued when they got home.

She claims Voynov was trying to go to sleep, but she kept pressing the issue and got physical ... squeezing his shoulders and yelling, "No, I want to talk more." Marta says he only pushed her when she refused to get out of his face. That's when -- as we've previously reported -- she claims she turned and smashed her head into a flat screen TV in their bedroom.

In the letter, she describes how profusely she was bleeding and says, "I started yelling because it hurt quite a bit and I was very worried about whether I was going to need stitches and worried about how it would look." She says they decided to go to the ER around 11:30 PM.

Marta, whose first language is Russian ... claims she repeatedly told a police officer Slava did not try to kill her, and she was not afraid of him. As we've told you ... she and Slava believe the officer did not understand her because her English is so poor.

In fact, during a hearing Monday ... police testified the she had said Voynov punched, kicked and choked her. So, it appears there was a communication gap ... or someone's lying.

Marta ends the letter by pointing out she's "heard about other athletes on the news" who did things that Slava didn't ... yet they were not charged. She's clearly referring to Ray Rice ... who got a pretrial intervention program instead of being prosecuted for punching his then-fiancee.

Despite her objection ... Voynov has been charged with felony domestic violence.