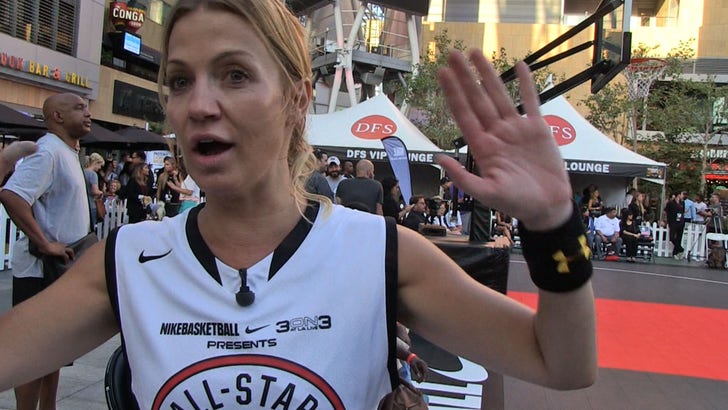 Michelle Beadle has Ronda Rousey's back in her heated war of words with Floyd Mayweather Jr. -- and says, ironically, the boxing champ can't handle a fight ... when he's not in a ring.

We got the ESPN host during a timeout at the "Nike 3 on 3 Celebrity Basketball Tournament" in L.A. ... and asked what she thought of Floyd's latest shot at Rousey -- basically saying Ronda can call him when she makes $300 million in 36 minutes.

Beadle told us, "He doesn't like to be challenged when it comes to matters outside the ring ... y'know, beating women up ... so he has to sort of kill that and go with the money stuff."

Of course, Michelle had her own feud with "Money" Mayweather when his camp banned her from the Pacquaio fight, she believes, because she commented about his domestic violence conviction.

Michelle also gave us her review of Ronda's new "do nothing bitch" t-shirts -- and you gotta see what she said about Floyd dying for water in the desert.

Funny ... unless you're Mayweather.