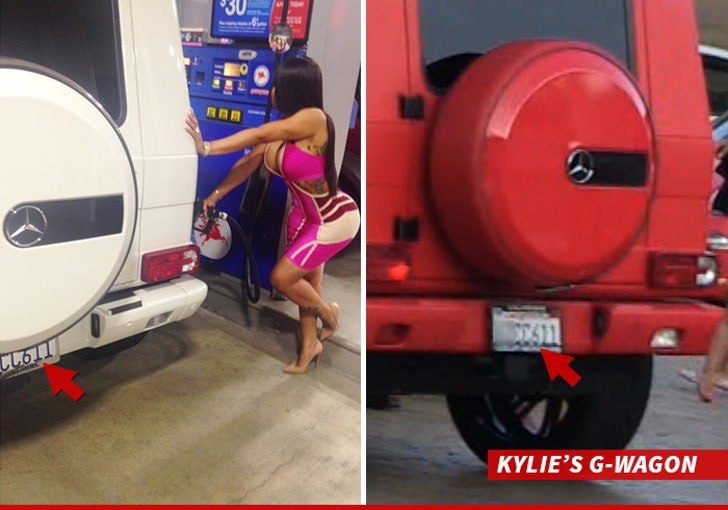 5:55 P.M. PST -- A source close to the Kardashians tells TMZ, Kylie just happened to be driving the G-Wagon to her birthday dinner Friday night, but it's Tyga's SUV and not a birthday present. The source acknowledges it's the same G-Wagon Blac Chyna was driving.

Kylie Jenner got a spiffy red Mercedes G-Wagon from Tyga Friday, presumably for her 18th birthday. It's a used Mercedes, which is not a problem. The problem is who used it before her -- Blac Chyna!

Turns out Tyga bought the 2013 SUV new and gave it to baby mama and then-GF Blac Chyna. We're told Tyga was the registered owner of the whip, which was black. Blac Chyna had it re-painted white and then re-re painted pink.

Our sources say recently Tyga told Blac Chyna she had to get a new car and return the G-Wagon, which she did. We're told Tyga had it painted red, picked it up Friday and Friday night Kylie was behind the wheel.

The telltale sign ... the license number Blac Chyna had is the same as Kylie's.

Tyga Blac Chyna Kylie Jenner You Might Want to Rethink Ride Me Exclusive The Kardashians Would You?