11:30 AM PT -- Chumlee's attorneys, David Chesnoff and Richard Schonfeld, tell TMZ ... "We will be analyzing what was allegedly found and whether the alleged seizure was lawful in a courtroom, not in the media. Austin (Chumlee's real name) has great faith in the judicial system, as do we, and looks forward to a just resolution of this matter."

Chumlee's Las Vegas home was loaded with so many drugs and weapons, it's consistent with a drug dealer's setup -- and featured a party spot called the "Chum Chum" room ... according to the police.

TMZ obtained the results of the search cops conducted when they arrested the "Pawn Stars" cast member last week -- and there's a huge laundry list of narcotics.

According to cops, Chumlee copped to smoking "a lot of weed" ... but insisted he's not a drug dealer. He said he typically buys in bulk, just for convenience.

Besides weed ... cops also found signs of cocaine use in the "Chum Chum" room, which has a stripper pole. Police say they found a clear plastic baggie with white residue and also a rolled up $1 bill with white residue.

As for weapons ... cops seized 12 firearms, only 4 were registered to Chumlee.

The report confirms police were searching in connection with a sexual assault case in which Chumlee is a suspect. Officers took his bedding and drew blood from him at the jailhouse. 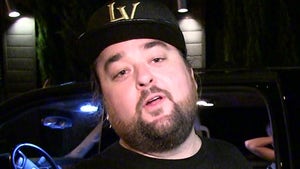 Chumlee -- I'm Not Feeling the DJ Thing After Vegas Arrest 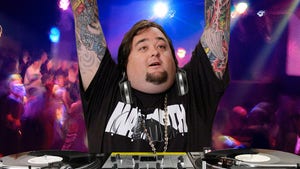