A tennis star with a HUGE backhand directed at Taylor Swift -- says she's sick of the singer always portraying herself as the victim ... just like she's doing in the Kanye West feud.

The tennis star is 22-year-old Eugenie Bouchard -- who's a huge pop culture fan -- and was asked about the Taylor vs. Kanye situation after she was knocked out of the Citi Open this week.

You gotta watch the clip (around 6:00) ... Bouchard says she's a huge Taylor fan -- "but I feel like sometimes she portrays herself as the victim a lot and she did this time around."

Bouchard -- who knows A LOT about the feud -- says she also doesn't care that Kanye didn't specifically ask Taylor for permission to call her a bitch in his song "Famous."

"You approved the thing where Kanye said he'd have sex with you but you didn't hear the time he said bitch? Like, come on."

"Like, it's all the same thing to me ... so I think she just way overreacted and I think she tried to get attention by saying she didn't approve of that." 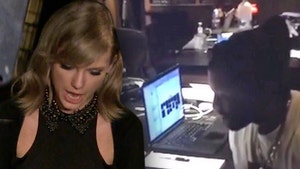