Donald Trump has a lot of pull in D.C. these days, but not with the FAA, because the agency is not budging on its decision to remove the Trump name from the markers that help pilots land their planes in Florida.

Here's the way it used to be ... air traffic controllers used Trump code names for the imaginary markers that guide pilots in for a landing at Palm Beach International Airport.

The code names included, "DONLD," "TRMMP" and "UFIRD" ... the last was an abbreviation for "You're Fired!" There was also a code name, "IVNKA."

An FAA source tells us ... after Trump announced his run for Prez and made the infamous comments about Mexicans, the agency swooped in and renamed the markers with horse themes -- "RIDRR," "RBACK" (roll back is an equestrian maneuver), and "SLIDZ" (a horse riding move).

The source tells us ... despite Trump's victory, the names of the Trump markers will not be restored. 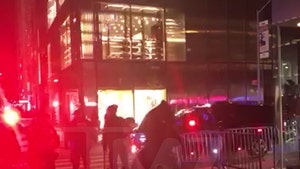 Donald Trump -- This is What a Presidential Motorcade Looks Like (VIDEO)