Stephen Colbert launched back into his verbal assault of President Trump ... the day after he caught some heat for calling Trump "Vladimir Putin's c**k holster."

Colbert didn't address any of the backlash against, or support for, his comment. Instead he tackled Trump's phone call with Putin ... suggesting Putin is the voice of reason between the two leaders. It was the opening minute of Tuesday's monologue. Interestingly, it didn't get anywhere near the laughs the c**k joke did.

He also skewered the prez over his media attacks and the First Amendment (starts at 4:54 in the video).

Truth is ... going after Trump has boosted Colbert's ratings. So, as they say ... if it ain't broke. 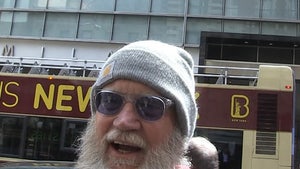 David Letterman Gives Stephen Colbert Props, 'It Would Kill Me' to Do That Show Now (VIDEO)