Spirit Airlines shoulda seen it coming -- a group of angry passengers escalated their rage into a full-on brawl that included cops following the airline's cancellation of 11 flights at a Florida airport.

The incident went down Monday at Fort Lauderdale-Hollywood International Airport where a damn near riot unfolded after passengers started yelling and pounding on the counter.

Attempts by security to calm the masses failed before cops stepped in ... only for cops to then get dragged into the melee. At least 3 people were reportedly arrested.

Spirit -- which also had 26 flights delayed -- is in the middle of a union dispute with the Airline Pilots Association and its pilots, who refused to fly out of protest.

A spokesman for Spirit tells us, "We are shocked and saddened to see the videos of what took place at Ft. Lauderdale/Hollywood International Airport. This is a result of unlawful labor activity by some Spirit pilots designed to disrupt Spirit operations for our customers, by canceling multiple flights across our network." 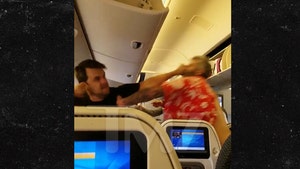