Faye Resnick -- the best friend of the woman O.J. Simpson killed -- seems unhinged over his impending release from prison.

We got Nicole Brown Simpson's best friend in WeHo Wednesday leaving Catch restaurant and she made it clear ... she has NOTHING to say about O.J.'s entrance back into society.

Faye's got reason to fear Simpson. During his murder trial O.J. and his legal team tried to blame Nicole's death on her ... falsely suggesting a Colombian drug cartel may have slit Nicole's throat because Faye didn't pay a cocaine bill.

Resnick has called Simpson "pathological" and we're told she still fears him. 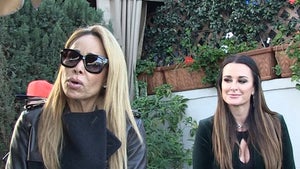