Ezekiel Elliott says there's NO WAY the woman whose top he pulled down at a St. Patty's Day parade in March could have been mad at him ... because they had sex later that night.

The Dallas Cowboys running back testified to that incident during his appeals hearing in front of an arbitrator in NYC on August 29th.

During cross examination, lawyers brought up the St. Patty's Day parade -- where Zeke can be seen on video reaching over and pulling down a woman's top ... exposing her breast for all to see.

The NFL referenced that incident in its domestic violence investigation report -- and considered it when meting out Zeke's 6 game suspension.

But Elliott says the NFL didn't have all the facts -- insisting the woman is a friend and he believes he had "consent" to grab her shirt because she "wanted" him to.

Elliott testified that she didn't give him explicit permission before the incident but he found out later she was okay with it.

When asked during the hearing if that's what he thinks "consent" means -- Elliott replied, "I mean, I think consensual to me means it's wanted. I mean it's okay."

Elliott says the two went home and had sex after the parade -- and again at a later date -- which proves she didn't feel he committed any wrongdoing.

It's clear Ezekiel doesn't think he should be punished for the parade incident at all. 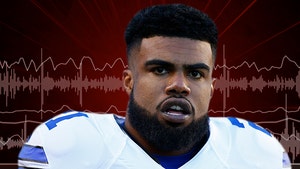 Ezekiel Elliott Accuser to Cops: 'He Busted the Side of my Jaw,' RB Claims She's Lying 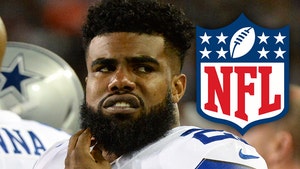