Tyron Woodley's sick and tired of all the drama between him and Dana White ... but says he's finally ready to let bygones be bygones with the UFC honcho.

Tyron turns his Namaste all the way up in this week's episode of "The Hollywood Beatdown" -- explaining why he's not only ready to cool it with Dana, but also Nate Diaz, Rafael dos Anjos and all the other fighters who've been throwin' shade on him.

That said, Woodley ain't afraid to check the celebs that need it -- including LaVar Ball and Blake Griffin's baby mama.

The UFC champ also weighs in on Damon "Snacks" Harrison, the NY Giants star who told us he'd kick Stipe Miocic's ass ... and tells us about a different NFL player who he says could take a UFC fight RIGHT NOW.

Check out new eps of "The Hollywood Beatdown" every Friday on the TMZ Sports YouTube channel. 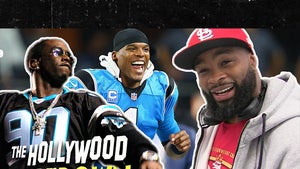 Tyron Woodley: I Challenged Dana White to a Fight While Drugged Up on Meds