Ever challenge your boss to a fist fight while hopped up on painkillers?

That's exactly what Tyron Woodley did earlier this week ... when he texted Dana White in a post-surgery haze.

No, we're not kidding.

Tyron told us all about it on "The Hollywood Beatdown" -- saying he called out the UFC honcho after a shoulder surgery ... after some "ooey-gooey goodness" got the better of him.

FYI, Woodley told us his surgery was a success ... and you won't believe how fast he's expecting to come back and fight.

Also on the Beatdown, the welterweight champ ethers George Zimmerman for threatening Jay-Z over his Trayvon Martin docuseries ... and shows love to Floyd Mayweather and Diddy for considering big career moves. 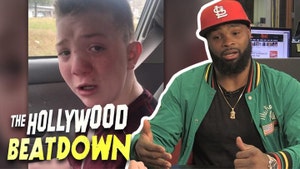 Tyron Woodley to Keaton Jones: Your Parents Are Trash, Get Away From Them