If Floyd Mayweather is serious about taking a UFC fight, he's already got a WORLD CHAMP offering to train him -- Tyron Woodley!

"Let me know when you need me to slide through -- we'll get you trained, get you ready," Tyron said on "The Hollywood Beatdown."

"Conor is the only option for him," Woodley says ... noting McGregor is "really a stand-up fighter" and doesn't pose as big of a threat as other UFC stars who specialize in wrestling or jiu-jitsu.

Tyron says he's excited for his pal -- and wants to walk him into the Octagon once the ink is dry on the contract!

Make sure to catch Tyron EVERY WEEK on "The Hollywood Beatdown." 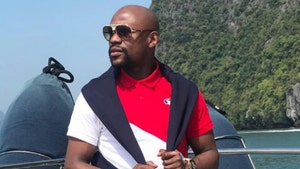