Lil Dicky's junk is seriously enhanced, and he's dropping the n-word like crazy in his greatest fantasy, anyway -- which is, apparently, to be Chris Brown.

Okay, we're not MTV (back when they played music vids), but Dicky's latest vid -- for his song, "Freaky Friday" -- is just too awesome to not discuss. Simple premise ... he switches bodies with Breezy, and hilarity ensues.

Highlights include Dicky instantly being able to dance, instantly having a daughter, driving Ferraris, getting chicks and saying the n-word almost nonstop. Oh yeah, his d**k is really big, too.

We gotta give Chris props, too, for taking a few good-humored shots at his lifestyle in the video. 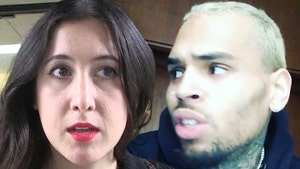