Cormier had just won the title, knocking out Stipe Miocic with a short right hand. As D.C. talked to Joe Rogan, Cormier challenged Lesnar to step into the Octagon, telling him, "Get your ass in here!"

4:33 seconds first round by knock out! Congrats #cormier #ufc226 pic.twitter.com/qS8upfeJlD

Lesnar was more than happy to oblige, shoving Cormier and screaming, "Touch me now, you go to sleep later."

But Lesnar wasn't done trash talking, calling Miocic "a piece of s***" and telling Cormier, "I'm coming for you motherf*****!"

Dana White made it clear ... Cormier vs. Lesnar is on, saying "We're definitely going to make that fight."

BTW ...Cormier becomes the second fighter in UFC history to hold titles in 2 weight classes at the same time. Conor McGregor was the first. 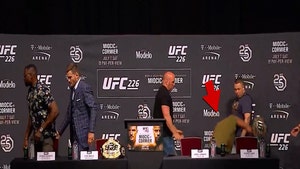