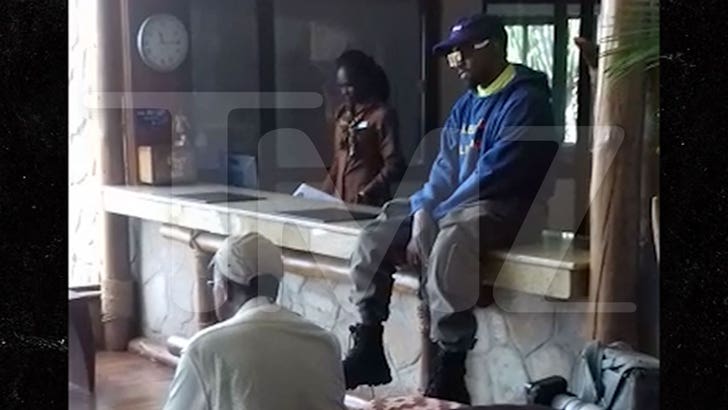 Kanye West and Kim Kardashian West were pretty much like any other fam visiting Africa ... except they had a phalanx of security at a five-star luxury resort.

Kim, Kanye and their brood arrived at Entebee International Airport Friday with a huge entourage. They were shuttled to the resort where they'll be staying until October 19th.

Check out the video ... Kanye hops on the counter during check-in, as hotel staff gawks. Enter Kim and what appears to be a nanny. Ye swings North West in circles, and flips her before she runs back to mama.

We're told Kim is so stoked she wants to extend their stay.

Kanye is working on his next album -- they will be producing music and shooting some videos while they are there. Big Sean is at the hotel as well, most likely to collaborate with Kanye on the album.

Kanye's told us he wanted to go to Africa to "feel the energy." He wants to record into a mic that's in the middle of nature.