A Trump supporter who was refused service at a vape shop captured what might be one of the craziest meltdowns we've ever seen ... yeah, this is just nuts.

Georgia resident Ian Furgeson tried buying something at Xhale City this week in Tucker, GA -- about half an hour outside of Atlanta -- and was apparently told to GTFO by the store employee ... who didn't want to sell anything to a Trump supporter. Furgeson was decked out in MAGA gear, BTW.

Well, things escalated quickly from there. Furgeson started recording the encounter, and the employee told him to stop or he'd call the cops.

Furgeson egged the guy on, telling him to do it ... and then the employee exploded with a "F*** OFF!" The vape store worker's breakdown only got worse from there, but weirdly enough ... he eventually calmed down and agreed to sell to Furgeson just to get him out.

Furgeson mocked him by saying, "Capitalism wins again" and ordered the employee to ring him up ... which the guy must not have liked, 'cause he changed his mind and became even more enraged ... again telling Furgeson to leave.

Furgeson eventually left empty-handed and posted the video to Facebook, which went viral. He later went on to say that someone at the company reached out to apologize and assured him the employee had been fired.

Generally speaking, private businesses have the right to refuse to service to people, so long as they're not discriminating based on federally protected classes, like race, religion, national origin, etc. But, the employee's actions here clearly weren't in line with his former employer's policy.

The company reportedly put out a statement on the matter, saying it values its clients and treats them with respect and dignity ... "regardless of their political views." 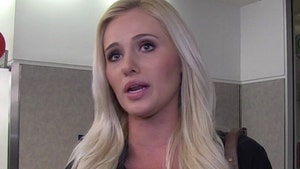 Tomi Lahren Gets Drink Thrown on Her at Minneapolis Bar 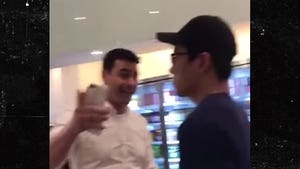